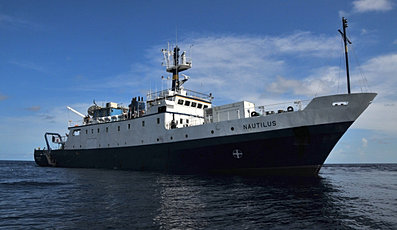 By Ian Holliday - The Westerly Sun

By Dr. Robert Ballard’s reckoning, the Exploration Vessel Nautilus, at the height of its annual expedition to the Black Sea and the eastern Mediterranean Sea, discovers a new ancient shipwreck roughly once every 11 hours.

“Over the last several years, we’ve discovered more ancient shipwrecks than anyone else on the planet,” Ballard said. “We’ve sort of figured it out.”

This summer, Ballard and the Nautilus team will return to the coasts of Turkey and Cyprus for another season of research and discovery, and as always, they’ll be bringing audiences at Mystic Aquarium and around the world with them through the Nautilus Live Theater.

Now in its third year, the 50-seat Nautilus Live Theater at the aquarium’s new Ocean Exploration Center hosts six shows a day, during which audiences at the aquarium connect live with the crew of the Nautilus to learn about the expedition’s latest discoveries.