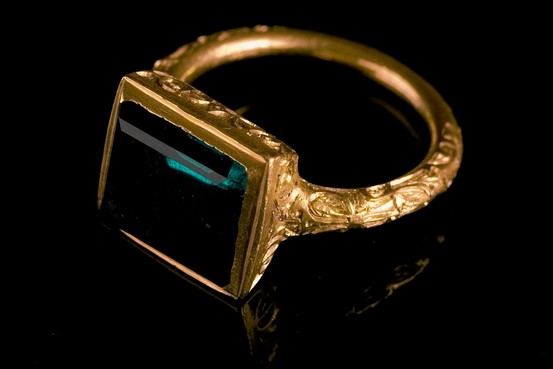 The 1622 wreck of the Nuestra Señora de Atocha, a Spanish ship laden with New World gold, became the fixation of a chicken farmer turned deep-sea diver named Mel Fisher. He searched doggedly for the treasure for 16 years (and tragically lost his son and daughter-in-law when a salvage boat capsized during the search).

In 1985, the Fisher team came upon a large portion of the wreckage. The treasure they've extracted since then is worth some $500 million, the Fishers say. A fraction of that is about to go under the hammer at a Philadelphia auction house.

Three large silver bars, two small gold "finger" bars and one gold disc that went down with the Atocha will be featured in Freeman's Jan. 25 Fine English & Continental Furniture & Decorative Arts sale. (Items from the sale are on view at the auction house's Philadelphia headquarters starting Friday).

In the early 1600s, the Spanish monarchy dispatched armadas regularly to stock up on gold, silver and gems from the Americas to help fund its army. The Atocha was one of several ships that fell prey to Caribbean hurricanes en route home from Cuba and sank off what would become Key West, Fla. On the Atocha, 260 people drowned and about 70 tons of treasure were lost. (The other ship, the Santa Margarita, ran aground.)

Mel Fisher's heirs have stayed in the family business and continue to mine the Atocha wreck and several others. Two Florida museums, the Mel Fisher Center and Museum in Sebastian and the Mel Fisher Maritime Museum in Key West, always have Atocha objects on display. In June, the Fisher crew came ashore with an emerald ring that Mel Fisher's grandson Sean says was recently appraised at $1.2 million.