Yes, he discovered the Titanic. No, he doesn’t want to talk about it 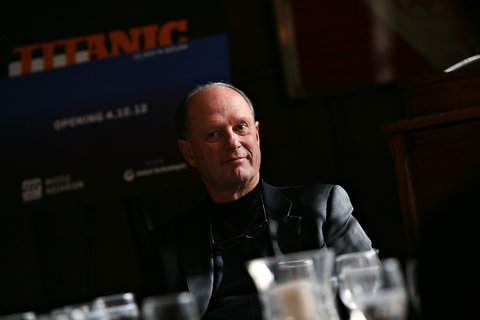 Robert Ballard has made quite a few notable discoveries in deep waters around the world in the last 27 years. But most people still want to hear him use the T-word.

He will do it, as he did for about half an hour on Wednesday at the Explorers Club in Manhattan, but he does not have to like it. Indeed, the stated purpose of his appearance was to promote a coming exhibition in Mystic, Conn., that will be devoted to his discovery on Sept. 1, 1985, of the wreckage of that most famous of ocean liners. You know, the really big one.

The one that hit an iceberg.

Mr. Ballard, the great explorer of the seas, is lending his name and his expertise to yet another attempt to capitalize on the public fascination with a century-old shipwreck.

Now 69, he would rather talk about another ship, one that floats and which he plans to use to survey the sea floor of the South Pacific. But he knows that there will be no escaping the Big T this year, the 100th anniversary of its sinking.

James Cameron is re-releasing his blockbuster movie about it in 3D. There will be a winner-take-all auction of artifacts from the ship at Guernsey’s, the Manhattan auction house. Another attraction dedicated to the ship is about to open in Belfast, Northern Ireland, where the ship was built.

When the planners of the exhibition in Mystic, which is scheduled to open in April to coincide with the anniversary of the Titanic’s striking an iceberg, approached him for help documenting his find, Mr. Ballard recalled, “I had put a lot of that out of my mind and moved on.”