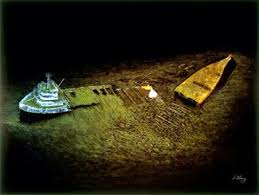 Collectors of Great Lakes maritime artifacts may want to set their sights on an auction house in Duluth’s Lincoln Park neighborhood this afternoon.

Several items from lakers, including some that appear to be from the ill-fated Edmund Fitzgerald, will go on the block today at Col. Brent Loberg’s Sellers Auction, 2103½ W. Third St. Loberg is quick to note that he’s not a colonel in the military sense, but wears the title in the tradition of accredited auctioneers across the nation.

The weekly multifaceted auction begins at 4:30 p.m. and probably will last about four hours. Loberg estimates he’ll get to the shipping paraphernalia about 6:30 p.m.

The auction features four paddles apparently from a life raft belonging to the Edmund Fitzgerald; an embroidered ship blanket that purportedly belonged to a cook who had to sit out the oreboat’s final voyage because of a fortuitous illness; as well as several clips and photos documenting the vessel’s tragic demise Nov. 10, 1975.

Loberg said the items came to him by way of the family of a man who worked at Fraser Shipyards in Superior, where the Edmund Fitzgerald was refitted during the 1960s. The family asked Loberg not to release their identity.