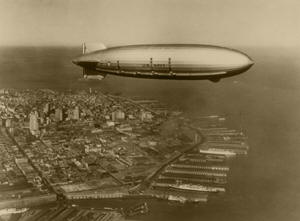 Commemorating the 75th anniversary of the loss of the U.S. Navy airship USS Macon, NOAA on Thursday announced that the wreck site on the seafloor within Monterey Bay National Marine Sanctuary has been added to the National Register of Historic Places.

The Macon, a 785-foot dirigible was one of the largest airships in the world – comparable in size to the RMS Titanic. It was intended to serve as a scout ship for the Pacific Fleet and had the ability to launch and recover Sparrowhawk biplanes.

In service less than two years, the Macon, based at Moffett Field in Sunnyvale, Calif., was damaged in a storm on Feb. 12, 1935, and sank in the Pacific Ocean off Point Sur, south of San Francisco. All but two of the Macon’s 83 crewmen were rescued by nearby Navy ships.

“The USS Macon and its four associated Sparrowhawk biplanes are not only historically significant to our nation’s history, but have unique ties to our local communities, where public museums highlight the airship’s history,”

“The National Register listing highlights the importance of protecting the wreck site and its artifacts for further understanding our past” said Paul Michel, Monterey Bay National Marine Sanctuary superintendent.

The National Register of Historic Places is the nation’s official list of cultural places considered worth preserving.

Authorized by the National Historic Preservation Act of 1966, the Register is part of a national program to coordinate and support public and private efforts to identify, evaluate and protect America's historic and archeological resources.

Properties listed in the National Register can qualify for federal grants for historic preservation.