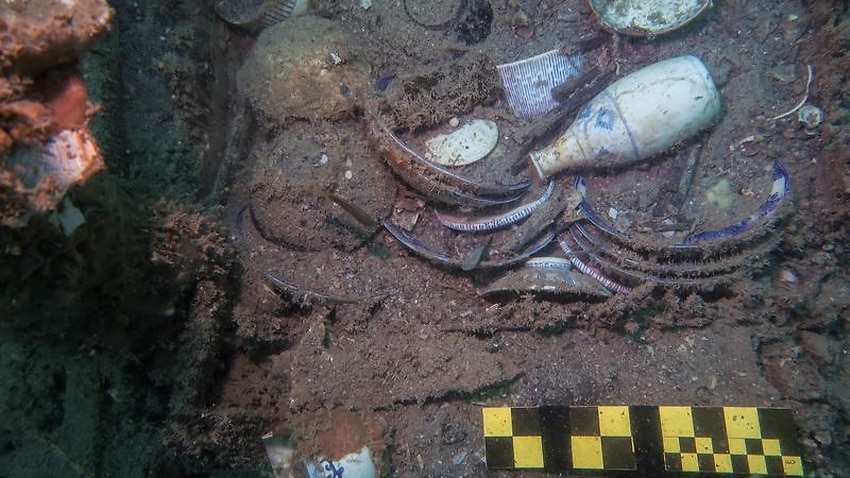 Deep beneath the waves on a remote part of the Northern Territory coastline, a Japanese shipwreck hides a tale of conflict, tragedy and secret friendship with the Aboriginal people.

Pearling mothership the Sanyo Maru was a lifeline for thousands of Japanese divers who plundered waters off Arnhem Land in the late 1930s. "This ship is part of a hidden history of a foreign fleet that came south and dominated," says maritime archaeologist Dr David Steinberg.

"They had more divers, more boats, better infrastructure and it knocked the local pearlers out of the water." The 280 tonne Sanyo Maru was at the centre of that fleet at a time when the Australian maritime border ended three nautical miles offshore.

Thousands of Japanese workers toiled on hundreds of ships in the Arafura Sea, harvesting pearl shells in the years before WWII broke out in the Pacific. Local journalist Terry Southwell-Keely described it at the time as a "floating foreign township" with a population exceeding many northern Australian communities.

"In the space of a few years they have developed a highly efficient and organised industry," he wrote in 1938. It was a thorn in the side of Australian authorities, "infuriating them" as a precious resource was exploited, local pearlers were displaced and a homegrown industry destroyed.

Japanese lugger crews were not welcome in Darwin where they were "regarded with suspicion despite being generous spenders", according to Southwell-Keely. They were also forbidden from landing at Boucaut Bay, 500km east, and the islands near to where the fleet worked.

"They had to bring all their own water and firewood but some secretly landed on the beaches," Steinberg says.