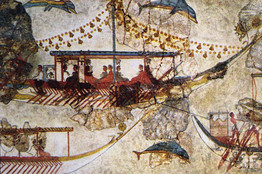 It takes a brave soul to rewrite history by sailing against current thought. More than 500 years after Christopher Columbus "discovered" America, another seaman is doing just that, entering previously uncharted academic waters with claims that other "Europeans" -- the Minoans -- got there first, thousands of years earlier.

Gavin Menzies, 72 years old, is drawing on his experience as a former British Royal Navy submarine commander to prove in a book he is writing that the Minoans were such supreme seafarers that they crossed an ocean and discovered the New World 4,000 years ago.

Eight years after he made controversial headlines with his first American history book, "1421: The Year China Discovered America," which sold more than a million copies in 130 countries, he may spark debate anew by claiming that the Bronze Age civilization of Crete, which built magnificent palaces, devised systems of writing and developed a trading empire, got rich on vast quantities of copper mined in America.

Transworld Publishers undertook his first book, in which he claimed that a Chinese eunuch led a fleet of junks to America 71 years before Columbus.

The book led to invitations to lecture at universities including Harvard, to an honorary professorship at Yunnan University in China, to the sale of film rights to Sky Motion Pictures and to HarperCollins snapping up the sequel in 2008, "1434: The Year a Magnificent Chinese Fleet Sailed to Italy and Ignited the Renaissance."