Total destruction by fire of a luxurious paddle steamer


Intelligence has been received of the destruction by fire of the American paddle steamer "Golden Gate" of 2850 tons, while on her voyage from San Francisco to Panama. She was a very large and powerful steamer.

While 15 miles off Manzanilla, she was found to be on fire in the engine room. She was promptly headed for the shore only a short distance from.

The passengers were ordered to the forepart of the ship, which was yet free from the flames, but the fire spread with such rapidity that the communication with the stern was cut off and great numbers were burnt to death before the ship was run on the beach.

When this was accomplished, it seemed that the unhappy voyagers had only changed the manner of their death; for a dreadful surf broke upon the shore and rendered the chance of escape precarious. But there was no choice...

Every part of the ship was on fire and the despairing people were compelled to entrust themselves to the waves. Many of them perished; some got to land burnt and shattered; the shore was lined with corpses.

When assistance arrived, it was found that 72 of the passengers and 62 of the crew survived. In all, 204 perished or were missing.

The ship was utterly destroyed by the combined action of the fire and the breakers. By the total destruction of the framework, the massive iron boxes which contained the treasure, sunk into the sand, but  a large portion of it has been recovered by means of dredging and the diving apparatus. 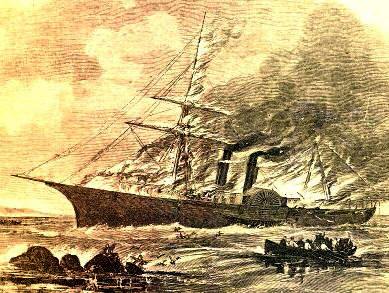