The loss of the Albion in China

Destruction of the ship Albion by fire


The "Albion", captain James Robertson was burnt at Whampoa in China, in December 1807 and under the following circumstances :

On the morning of the 4th, the Honorable Company's treasure left Canton, and captain Robertson proceeded down the river with a quantity of money belonging to the owners, but did not reach the ship until half past six in the evening.

Going over the gangway, he observed to the officer, who at this time was employed in receiving the Honorable Company's treasure, and had then upwards of 1,5 million of dollars on board, that there was a strong smell of fire. He went below to discern if possible whence it proceeded; and, observing the people at work in the main hatchway, he inquired whether or not they perceived any smell of fire, to which they replied in the negative.

Captain Robertson then went to the fore hatchway, uncovered it and removed the hatches, when the flames burst forth with great fury, so high as the main stay. He ordered the hatches to be put on again  and used every endeavour to smother the flames, but without effect. At 3 am. of the 5th, the ebb tide having made, she went over on her broadside. The decks, by this time, were so much heated, as to oblige the people to quit her. At 4 in the afternoon, she was completely burnt to the water's edge

Such was the fury of the flames, that the treasure between decks was run into masses of from two to ten thousands dollars weight. Suspicion of misconduct or carelessness fell on the people on board, and it was said that a seacunny(*) had dropped a candle in the fore-hold and concealed the accident through fear, but as there was no desertion among the people, this was not believed.

A later account states authentically that the loss of the "Albion" was not occasioned through carelessness, but in consequence of some paper umbrellas received on board as cargo, packed up not thoroughly dry, which had caught fire in the hold... 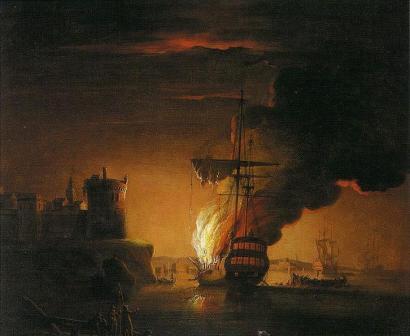