Loss of sycee silver from the Christina

Total wreck of the Christina

From various newspapers and printed source - by Pascal Kainic

A letter from Bombay dated October 31st, 1842, gives the melancholy account of the loss of the 3-masted ship "Christina", captain Birkett, on the way from Macao to Hong Kong.

She struck on the West London Shoal, on the coast of Palawan, on the 1st of July, and became a total wreck. A large quantity of treasure was lost

Discovery of treasure in the China Sea... (extract of a letter from Madras dated February, 22nd, 1844)

"The Spanish schooner, "Martines de Tunkin", fishing among the shoals in the China Sea, discovered a chain cable over the coral reef on the East London Shoal, and on a close examination, a vessel was discovered, with a sextant and a chronometer, in about three fathoms at high water. Close to these articles, what first appeared lead or pewter, turned out to be Sycee silver; and 150,000 worth of the precious metal was found and put on board the schooner, when the skipper, most honourably proceeded to Hong Kong, judging the money to be English property, he delivered the whole of the treasure to a mercantile house, until the insurance office gave the noble-minded Spaniard about 50,000 rupees as a reward.

It was conjectured in China that the bullion was part of the cargo of the "Christina", as she sailed two years ago, and has never been heard of since.


Was the treasure salvaged totally...? Somewhere in "paradise", some more silver ingots are probably waiting for their discoverers...! 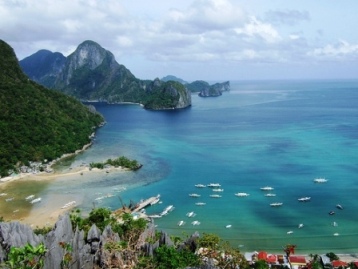 The magical coast of Palawan, Philippines, where the treasure of the "Christina"
maybe still lies...