Loss of a Pacific Mail steamer

The loss of the Pacific Mail Steamship Company City of Rio de Janeiro was one of the outstanding disasters on the western seaboard of the United States.

She was 3.458 tons and 345 feet long and on February 2nd, 1901, the vessel with 201 persons on board under the command of Captain Ward, left Hong Kong for Yokohama and San Francisco.

She reached her destination on the early morning of the 22nd in a dense fog, and was taken over by a pilot. The Captain was warned by he pilot that there was some danger if he persisted in attempting the passage of the Golden Gate in the thick state of the weather, nevertheless he decided to proceed.

The ship had not gone far when she struck, sustaining serious injuries below the waterline but being able to steam for a further 15 minutes.

After a little more than a quarter of an hour, at 5 a.m., the ship pitched forward and went down by the head, off Forth Point, 1.000 yards of a rocky shore, taking with her 72 passengers and 32 of the crew, including the Captain.

Of 18 women on board only three were saved. Mr. Wildman, the U.S Consul-General at Hong Kong and his family were drowned, as well as an expert in diamonds.

Reports say that 150 persons were lost, most of them from Chinese and Japanese nationality. At the time of the disaster the vessel was carrying a cargo valued at £ 100.000 and specie to the value of $ 600.000. Some other statements, say that she was carrying more than 2000 bars of tin.

A search was made for the hull of the wreck and a reward offered to any who might find it, but it was never found. It can only be concluded that it was swept away by the force of the tide.

At the Inquest held on a body from the wreck the jury returned a verdict to the effect that Capt. Ward and Pilot Gordon were criminally negligent in proceeding through the Golden Gate In a fog. The company was also censored for employing a Chinese crew.

She now lies in 320 feet of water and her wreck is listed in the National Register as nationally significant.

... May 1931... After having been lost for 30 years the steamship, City of Rio de Janeiro, which went down off the Golden Gate when finishing a voyage from Australia and China on February 22, 1901, has been located by Charles Haskell, salvage operator, who is sending divers down to attempt to reclaim the £1,000,000 worth of bullion aboard. 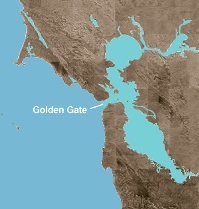