Burning and heavy loss of life in the river steamer

Burning of the steamer Benares

This fine steamer of 400 tons, carrying 150 souls, which plied on the Ganges between Calcutta and Benares, has been totally destroyed  by fire, with great loss of life. A letter from one of the passengers gives an account of the catastrophe:

"I sit down to acquaint you with one of the most awful calamities that has befallen the above vessel that is possible to imagine, and  which is still more distressing as it has been attended with serious loss of life and property. About seven o'clock, while under steam within three miles of Rajmahal, the after part of the vessel, where the horses and conveyances are, was discovered to be on fire.

Owing to the combustible materials close at hand the fire raged furiously, and the confusion consequent thereon baffles all description. The vessel was run on a sandbank, and immediately, the majority of the passengers jumped into the water.15 or 16 persons were drowned instantly, several more are missing. and I fear they have all meet a watery grave. All the cargo in the after hold is burned, also the conveyances and eight horses; the latter were literally roasted alive.

Every one on board has suffered more or less. I have lost nearly all my clothes, and some passengers have lost money and property to the extent  of some thousands of rupees. I stuck to the vessel throughout, and have got off pretty well. I tried all I could to persuade the passengers not to leave the vessel until there was no chance of saving her, but it was useless. The fire extended as far as the engine room, and was then got under, but not until everything in the after part of the vessel was consumed. 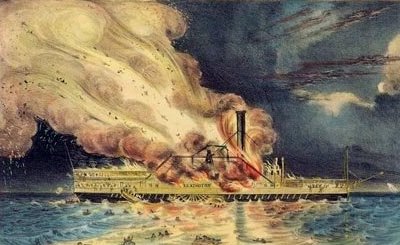 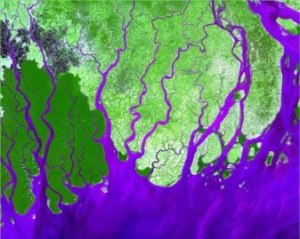 An old steamer on fire and  the Ganges river delta