Terrible loss of the packet ship"Solway"
by Pascal Kainic

The most painful sensation was caused on Sunday last by the intelligence of the loss of the Solway, Royal West Indian mail steamship of 1700 tons, on the 7th of April, 1843, on her outward passage, 15 miles from Corunna and the sacrifice of a number of lives, including that of her esteemed commander Captain Duncan.

The melancholy news was brought by the Lady Mary Wood, which arrived on that day at Southampton, from Lisbon.

The Solway sailed from Southampton on Saturday 1st of April and reached Corunna all well.

On the 7th instant, she left Corunna for Madeira, on her voyage to the West Indies, and passed the light house at 10 o’clock. At 12.10, she struck At full speed, on the Baldayo shoal and struck several times going over the shoal, finally going down in 13 fathoms of water.

Only 20 minutes elapsed after she first struck before she went down. The water soon reached the engine room and the boilers collapsed and blew up. Most of the passengers and crew off duty had turned in.

The weather was still and the night moonlight, otherwise the destruction of life would have been much greater. The jolly boat was launched first and, as many as it could conveniently hold were lowered into it, but the frail boat was not destined to reach the shore.

From some cause still unexplained, it was capsized and every one on board perished. One paddle-box boat was next launched, and being cut adrift to save time, fell broad side in the water and half filled; notwithstanding which, it was the fortunate means of saving 52 persons.

Captain Ducan died in the courageous act of loosing the second paddle-box boat, to land the remaining persons on board. He was last seen at this humane duty when the ill fated vessel went down, and he was lost.

On going out of the harbor, we passed one of the paddle-box boats apparently full of people; further on, we passed one of the quarter boats, with 9 men in her. We got to the Solway about 12.30 and to give you an idea of what depth of water she is in, I may state that her mizzen masts is just out of the water. She is rolling very much and is probably to pieces by this time, as it is now blowing a heavy gale north-west.

The ship is about 3 miles from the main; the agent as a guard abreast of her, in order to pick up the dead or any property that may come ashore; and when the gale abates I will, if the agent deems it necessary, proceed to the spot in a boat.

Having seen in your papers, various accounts relative to the loss of the Solway, and being, I believe, the only passenger at present in London, I feel it particularly incumbent on me, to place before the public certain facts connected with the sad catastrophe which has led to so lamentable loss of life.

The task is an ungracious one, nor would I undertake it, but that an imperative sense of duty induces me to do so. Before entering further on the subject, let me bear testimony to Captain Duncan’s kindly bearing of all classes on board his ship and also to his disregard of personal safety, his only anxiety being to save the live of others.

The elements of comfort were in profusion on board and the ship was itself a tower of strength and an admirable sea boat. Having stated thus much and indeed it would have been wrong to have said less, I have now to communicate the fact, which rests upon good authority, that the course the
Solway pursued on quitting the harbor of Corunna and until the moment she struck was W.N.W. I escaped by jumping from the spar-deck overboard in the hope of reaching a small boat crowded with seamen and engineers.

I was immersed in the water and my legs severely contused by the side of the boat. I was nearly suffocated by the smoke and ashes which rushed up from the hold. For a considerable time, I could not distinctly observe what was passing on board the ship, but I saw her sinking.

The whole period which elapsed from the time she struck until she went down did not exceed 25 minutes. I would here remark that although I give Captain Duncan every credit for endeavoring to allay all the fears and alarm of the passengers, I am bound to state that had a different course been pursued and the life-boats instantly lowered after the vessel struck, every soul who could be roused from sleep would have been saved.

When the Solway struck there were light airs, inclinable to calm, with swell. It being a few minutes after midnight most of those on board, except those looking out on their usual watch, were asleep. Those saved in the few boats lowered down were almost in a state of nudity.

The vessel sank in 25 minutes after she struck. The Spanish Consul Edwardo Santos and the Commanders of 2 French vessels of war which went alongside the wreck, gave all the assistance in their power.

The Captain-General, his lady and daughters also behaved with the utmost kindness on the melancholy occasion. 98 persons were saved, 35 were drowned.

Lieutenant Wentworth from the Royal Navy and agent on board the Solway lost everything he had on board or public or private property.

She had a general cargo including he mails and one box of specie containing 1300 pound sterlings. 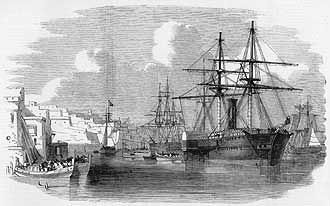