An Indian ship lost with treasure

Loss of the Indian ship Fyz-Ool-Rahimanee


Account of the loss of the Fyz-Ool-Rahimanee, from four lascars belonging to the ship - 1820

The Fyz-Ool-Rahimanee, belonging to Mahommud Ally Khan of Bombay, bound to Bengal, sailed on the 8th instant, under the command of captain Boles. Several passengers of various nationalities and 24 lascars were on board.

She left Bombay with a favourable wind, but a gale having set in on the 9th, she began to leak as well as to take in the sea at her ports. The captain ordered the the pumps to be worked, and the water was also bailed out with buckets. But instead of diminishing, it continued to increase. At the same time, a severe storm  was announced on the coast of Malabar.

The ship being likely to sink, it was determined to run her ashore, arriving off Caup, to the South of Durrie Bahadoogun, on the coast of Canara. But at 10 o'clock AM, on the 10th, it was decided to get into the long boat to escape the sinking. The ship went down, the boat floated off, but the waves upseted her and all who were in her perished.

On 80 souls, there is every reason to believe that at least 50 were drowned, including the commander, his wife and children, a lady passenger and two mates. The ones who escaped are: a Butler, a servant, one passenger, about 20 lascars, 63 horses and five horsekeepers.

There was also a chest containing treasure that was lost with the ship... 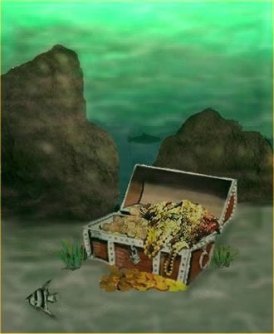 Who will be the lucky one to find this genuine treasure chest ?