A clipper ship on fire

Penang - Account of the captain Henry Lovett, commander of the late ship - 17 April 1851

The Bombay clipper "Ardaseer", of 450 tons, under the command of Captain Lovett, was destroyed by fire on the night of the 10th instant.

We were on a voyage from China and Singapore  for Calcutta, with a rich general cargo, besides a large quantity of treasure.

We were in sight of Pulo Bouton, which island bore N.N.W. about ten miles, when the sad disaster occurred. At 8 p.m. I had just returned from forward after taking the bearings of the island, and requested the chief officer, Mr. Rogers, who was in charge of the deck to look out for the same, when the gunner and his mate rushed up from the after hatch, reporting a quantity of smoke in the gunroom. Immediately, the chief officer and myself entered the gunroom with other hands, and found no appearance of fire, but a dense smoke issuing from the after part of the ship. Our first care was to hand up copper powder magazines, whilst doing this, the 2nd officer, Mr. Chapman, with other hands, were hoisting up water and passing it down below; great quantities were thrown where the smoke was most thick.

The carpenters were now ordered to scuttle the gun deck over the place we supposed the fire to be, and through these scuttles water hoses were lead, and water thrown as fast as all hands could hoist it up. We were now about an hour using every exertion to get the fire under, but apparently to no purpose, and no one could remain below from suffocation; the smoke being so dense. I am glad to say we were enabled with difficulty to save a portion of the treasure.

I now wore ship with her head towards Penang, hoping to get to this place before the fire destroyed the vessel, supposing it to be a smouldering one. Orders were given to get the long boat out and the quarter boat in readiness; before this could be accomplished, the after hatch burst open and volutes of smokes issued forth. The smoke was so thick in the cabins, by this time, that I could only save one out three chronometers.

The fire had now spread fore and aft, and as the decks were no longer tenable, I ordered all hands into the boats, and only had time to get a small keg of water which was in the galley, and a few pounds of biscuit. With this, we left the ship and laid off till she was in a blaze up to her trucks. The extraordinary rapidity of the fire precluded the possibility of either myself, officers, passengers or crew, saving any of their private property.

I was in the longboat with the greater part of the crew and treasure, the chief officer in the gig, and the second officer in the cutter, with the passengers, and each having a portion of the treasure., I steered for Penang, ordering the boats to keep close company. We sailed and pulled until noon next day, it had fallen calm, and the sun intensely hot, and the crew and passengers suffering much from want of water.

We were now fifty miles from Penang, when a sail was seen... We succeeded in reaching the vessel which proved to be the Bremen ship "Leibnitz", captain Wieting, by whom we were received on board and shown the most unremitting attention and kindness.

In addition to her original and valuable cargo from China, the Ardaseer shipped the following treasure : gold dust 9400 dollars, Sp. dollars 7000, and four boxes of treasure, value not stated. 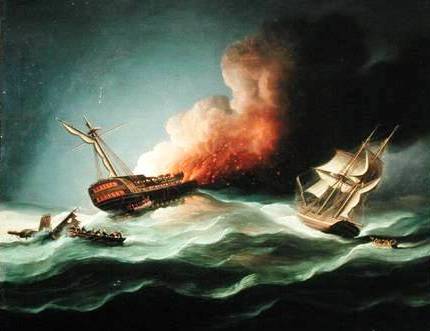 A ship on fire, ready to founder...