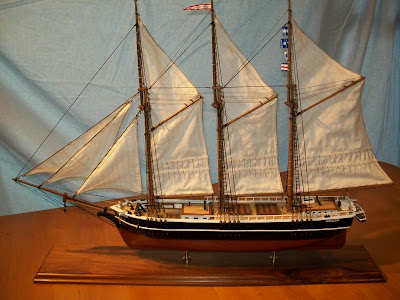 A nonprofit marine archaeology company thinks it has found one of the most legendary shipwrecks on a stretch of North Carolina coast famous for them.

The three-masted schooner Crissie Wright went aground and partially sank in shallow water just off Shackleford Banks on Jan. 11, 1886, near the now-vanished community of Diamond City. Shackleford Banks is the barrier island just across Beaufort Inlet from Fort Macon State Park.

The wreck was visible for months after it occurred, said Rob Smith, president of the Beaufort-based Surface Interval Dive Co., which had looked for the wreck for 15 years with no luck.

Historical accounts of its location put it due south of the DiamondCity Graveyard, which Smith said his team had not been able to find.

But Smith's company got a break when it recently received information about the location of the graveyard. Using equipment such as a magnetometer, which can detect metal objects such as the fasteners that hold a wooden ship together, searchers almost immediately found a large wreck where expected, just outside the surf line, buried under the sand.

"I don't normally jump to conclusions, but because of the location and the new information we received about the graveyard location, I'd say the chances are 85 percent that this is it," Smith said.

The ship was close enough to shore that the seven-man crew, which had survived the sinking, could be seen by a crowd that gathered on the beach.

But seas were too rough for local fishermen to reach them, and then the temperature plummeted, with some reports saying it went as low as 8 degrees overnight. Bonfires were built ashore to be ready to warm the crew members when they were finally rescued, but it was a day and a half before anyone could reach the ship.

The Crissie Wright crew, soaked and freezing, apparently climbed into the rigging to stay out of the seas sweeping the deck. At least three crew members either fell or were swept into the sea, and the others began freezing to death, one by one.

When rescuers finally climbed aboard, they found just one survivor, barely alive, under the rigid bodies of three of his shipmates, all of them wrapped in a sail. Those three were buried in a common grave in Beaufort, and the story of the Crissie Wright's end became a local legend, told by generation after generation.