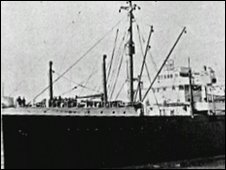 Many in the UK have never heard of SS Mendi, yet in South Africa's Easten Cape Province she is as famous as RMS Titanic.

In February 1917, she was lost off the south coast of the Isle of Wight with, 600 troops on board. Sinking 9 miles (14.4 km) off St Catherine's point, it is a story that is still virtually unknown in the UK.

Diver Martin Woodward was the first person to find and identify the wreck of SS Mendi in 1974. It was not until later he discovered the tragic story behind the artefacts that he brought to the surface.

Martin, owner of The Shipwreck and Maritime Museum in the Isle of Wight said: "The ship was coming up through the Channel destined for Le Havre."

As part of the British Empire, South Africa was automatically at war with Germany. Thousands of men were recruited as labourers, to dig trenches more than 5,000 miles (8,000 km) away from their homes.

The 4,000 ton Mendi was hit in fog by The Darro, almost three times the size of the troopship, and sank in 20 minutes. Martin explained: "A lot of people who were in the holds were drowned instantly."