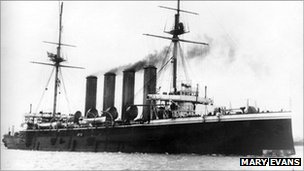 HMS Aboukir, HMS Hogue and HMS Cressy were sunk 22 miles off the Dutch coast in 1914 by a German submarine and are the resting place of 1,500 sailors.

But the International Maritime Confederation says that "our sailors should be allowed to rest in peace".

It has signed a letter in the newspaper, stating: "We, the presidents of associations of European naval veterans forming the International Maritime Confederation, suggest that no such desecration would take place in graves on land."

Vice Admiral John McAnally, president of the Royal Naval Association and president of the International Maritime Confederation, which includes European naval veterans' associations, said: "This is the resting place of 1,500 sailors, people like us.

"We think they should be treated with due care and respect, and not regarded as a source of profitable scrap metal."

Vice Adm McAnally said there would be "a tremendous fuss" if something like this happened on land.

He added: "The fact is sunken ships in international waters are under no jurisdiction. As I am aware, the government shares the same frustration as we do."