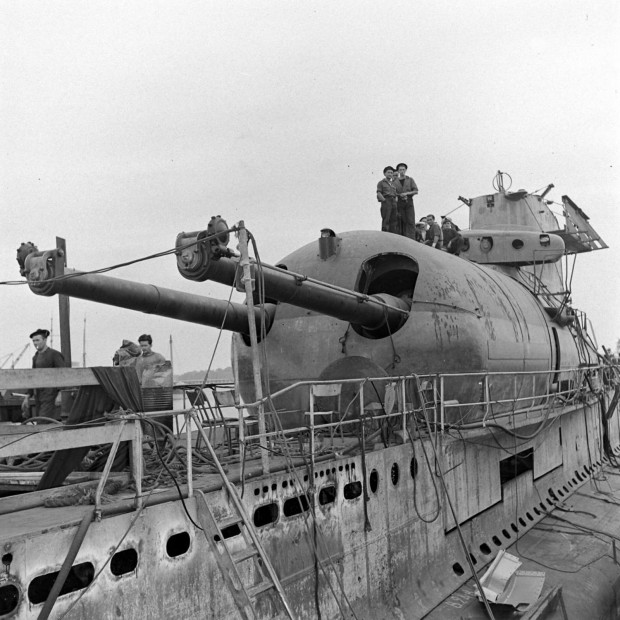 The giant Free French submarine “Surcouf” — which vanished after leaving Bermuda during World War Two [1939-45] and has long been the subject of controversy and conspiracy theories — is the subject of a lengthy report in the latest issue of a Nova Scotian naval journal.

“Bosun’s Call”, the Nova Scotia Naval Officers’ Association newsletter, recounts the story of the ill-fated French Navy “corsair submarine” — at 361-feet in length, the largest ever built up to that time.

Named after an 18th century French pirate and launched in 1929, “Surcouf was designed as an “underwater cruiser” intended to seek and engage in surface combat as well as torpedoing enemy shipping while submerged.

In theory the Besson observation plane could have been used to direct fire out to the guns’ maximum range in these pre-radar days. Anti-aircraft cannon and machine guns were mounted on the top of the hangar.

Despite her impressive specifications, “Surcouf” proved to be plagued by mechanical problems: her trim was difficult to adjust during a dive, on the surface she rolled badly in rough seas, and she took over two minutes to dive to a depth of 40 feet, making her vulnerable to aircraft.

“While the German U-Boats were prowling off the Atlantic coast and the Caribbean, the Free French submarine, ‘Surcouf; patrolled the eastern seaboard from Canadian Maritimes, to New England, to Bermuda, and toward the Panama Canal Zone,” write retired American submarine captain Frederick Hallett and former US Coast Guard journalist Neal P. Cortell in “Bosun’s Call”.