Secrets of the Heroine 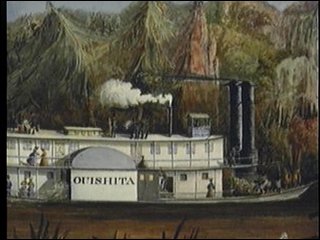 A few years ago, what looked like a pile of wood surfaced in the Red River near Fort Towson but was more than a pile of wood... a lot more. KTEN's Randy Garsee traveled to the remote location to see what attraction historians and archaeologists alike.

This is it: a pile of wood.

If you didn't look closely, you might think it was just another dead tree, like this one, dragged into the Red River by a flood. But it's no tree.

John Davis says, "This is the only example of that type of craftsmanship that is known to have been archaeologically excavated."

John Davis is with the Oklahoma Historical Society at Fort Towson. He says these waterlogged remains attracted himself and archaeologists from Texas A&M.

"It's part of our history. It's one of the minute details of the part transportation played in the evolution of Oklahoma."