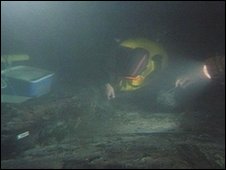 The ship was located in the mouth of St Peter Port and was suspected to be a medieval barge. Closer inspection in summer 1983 revealed it was in fact a Roman ship and so work began to "rescue" it.

It was raised between 1984 and 1986 and since 1999 has been at the Mary Rose Trust undergoing preservation work.

Dr Rule described raising the ship as "a rescue operation" because "the ship was being destroyed by the propeller wash of the large vessels entering and leaving the harbor".

She said that discovering it was a Roman vessel was "the most exciting moment of my life" from both a personal and historical perspective.

She explained that the discovery was very important as it is a rare sea going Roman ship, while most found are canal or river vessels and that it would shed light on the trade routes used due to the pottery found from as far away as Spain and Algeria !