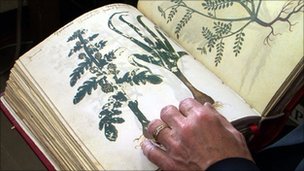 Alain Touwaide looks at some of the ancient texts he has used in his research.

DNA extracted from 2,000-year-old plants recovered from an Italian shipwreck could offer scientists the key to new medicines.

Carrots, parsley and wild onions were among the samples preserved in clay pills on board the merchant trading vessel that sank around 120 BC. It's believed the plants were used by doctors to treat intestinal disorders among the ship's crew.

Such remedies are described in ancient Greek texts, but this is the first time the medicines themselves have been discovered.

"Medicinal plants have been identified before, but not a compound medicine, so this is really something new," says Alain Touwaide, director of the Institute for the Preservation of Medical Traditions, which has the world's largest digital database of medical manuscripts.

Prof Touwaide is working with scientists at the Smithsonian's Natural History Museum, who carried out the DNA analysis. They discovered traces of carrot, parsley, alfalfa, celery, wild onion, radish, yarrow and hibiscus contained in the ancient pills.

The pills, which researchers believe were diluted with vinegar or water to make them easier to ingest, were preserved inside tin boxes and were the size of coins.

"I was always wondering if the texts were only theoretical notions without practical application," he says. "Now we know they were applied."

In May, Prof Touwaide's conclusions, based on the DNA findings and his own study of medicinal texts, will be formally presented to an international gathering of archaeologists, historians of medicines and other experts in Rome.

"What is remarkable is that we have written evidence [from the ancient Greeks] of what plants were used for which disorders," says Alisa Machalek, a science writer for the National Institutes of Health, one of the world's leading research centres.