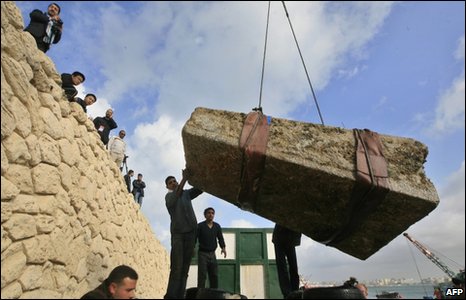 A huge granite block thought to have once formed part of a temple pillar in a sunken palace of Cleopatra has been raised from the sea at Alexandria.

The nine-tonne stone, said to be from a temple to the goddess Isis, was lifted by crane out of the waters which have covered the palace for centuries.

It was cut from a slab of red granite quarried in Aswan, some 1,100km (700 miles) to the south, officials say. There are plans to exhibit it in a new museum devoted to the sunken city. Earthquakes are thought to have toppled the city in the 4th Century.

"This is one of the most important archaeological finds in Alexandria, among the 400 items recovered by the Greek archaeological team that has been engaged in underwater research since 1998," Egyptian Culture Minister Faruq Hosni said at the scene.