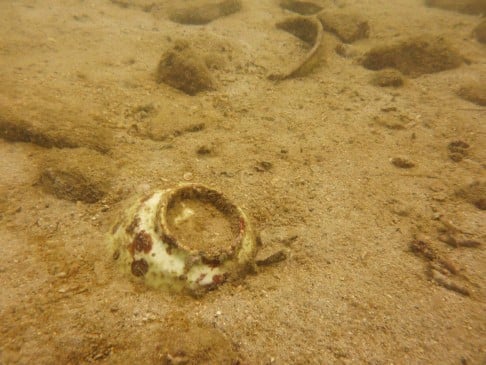 A group of local divers are on an underwater mission to find historical treasures they believe may have been resting on the sea bed off Sai Kung for centuries.

The seven members of the Hong Kong Underwater Heritage Group will complete their 13-day expedition today, retracing their 2010 search in the same area off High Island Reservoir, which turned up some promising finds.

"Twenty-two of them were intact blue-and-white porcelain bowls and plates.

"That surprised us. Why were there so many artefacts there?"

The group of divers are mentored by Dr Bill Jeffery, an Australian maritime archaeologist who lives in Hong Kong. Jeffery said the artefacts could date back to the Ming (1368-1644) or early Qing (1644-1912) dynasties, and could have ended up on the ocean floor after a shipwreck.

"Trading was going on in this general area, but how much was going on and are there other shipwrecks there? Quite possibly," Jeffery said, adding that it was too early to say what else might be found at the site.

"We need to do the excavation, then to get ceramic experts to look at what we have found to see the significance of the materials."

The group is hoping to find the source of the artefacts found in 2010.

Cheng Kai-ming, former chairman of the Archaeological Society, said it was an unusual undertaking for a group of amateurs.

"It's certainly rare to see [people] like them using their spare time for underwater archaeology … which is much riskier than on dry land, especially working with shipwrecks."

Both Cheng and Jeffery are keeping their expectations low about the likelihood of finding anything significant but that has not dampened their enthusiasm.