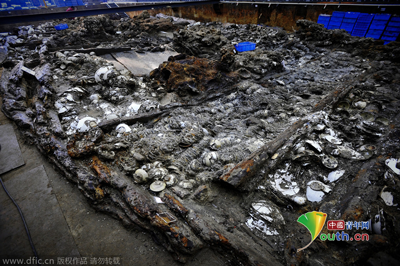 Great progress has been made in the recovery of thousands of relics from a famous Song dynasty ship that sank in the South China Sea about 800 years ago.

After a year of hard work, most of the silt covering thousands of artifacts inside the ship has been cleaned up.

It is estimated that there are 60,000 to 80,000 relics inside the ship, including gold artifacts, brass and iron wares, and many porcelain items. Now that most of the mud and silt has been cleaned up, one can see densely arranged relics.

The discovery of the sunken ship in 1987 was said to shed new light on the marine silk road, through which China's silk, porcelain and other artifacts were transported to Southwest Asia, the Middle East, and all the way to Africa and Europe.

But the wreckage was not lifted from the ocean floor until December 2007.

It was then placed in a pool-type container called the "Crystal Palace," which became part of a Marine Silk Road Museum built on the site, in Yangjiang city, Guangdong province.

At the museum, visitors can witness the salvage process and see the thousand artifacts already extracted from the ship. Made of gold and porcelain by Song artisans, they were meant to be sold overseas. Some of the more recently restored relics have influences from mid-western Asia.

Nanhai One is the oldest and largest sunken ship ever found in China. The remaining ship body is 21.8 meters long and has 13 large cabins for goods storage.

Removing all the relics from the wreckage is expected to take another two to three years.