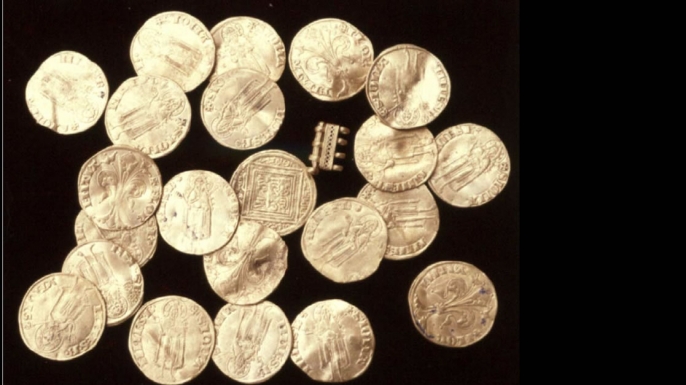 In the 13th century A.D., the city of Acre on Israel’s northern coast was a key stronghold for embattled European Crusaders defending Christianity in the Holy Land. But in 1291, a vast Egyptian army of some 100,000 soldiers led by the new Mamluk sultan overran the Crusader garrison there and razed the city.

Now, marine archaeologists have discovered a long-lost ship that met its watery end in the crescent-shaped bay off the city’s harbor. Carbon dating of the ship, and the cache of gold coins found inside, suggests the wreck dates to the siege of Acre, as Christians made a desperate attempt to flee the city and their knights made their doomed last stand.

The ship that marine archaeologists recently discovered in the Bay of Haifa appears to have been damaged by the dredging that occurred when Acre’s modern harbor was constructed.

All that’s left now are fragments of the wooden hull, the keel and some wooden planks covered with ballast. Carbon-14 testing of the ship’s remains dated the wreck to between 1062 and 1250 A.D., the era when Acre was the last remaining Crusader stronghold in the region.

But what the archaeologists found alongside the ship was even more amazing: A mother lode of some 30 gold coins, which a coin expert identified as Florentine “florins,” minted in the Italian republic of Florence beginning in 1252.

The coins pinpoint the shipwreck to the last half of the 13th century-which means the ship and its cargo may have well gone down during the dramatic fall of Acre in 1291, when Egyptian forces toppled the city.