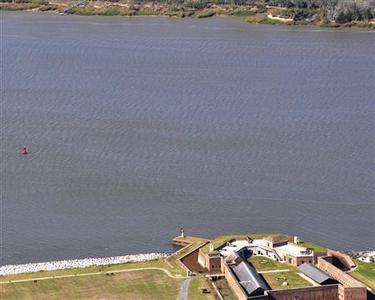 A Confederate ironclad warship, scuttled by its crew to prevent it from falling into Yankee hands, will be salvaged before the long-planned dredging of the mouth of the Savannah River to handle big, modern commercial container ships.

The U.S. Army Corps of Engineers, in charge of the dredging project, can't say how long it will take, but Savannah won't be able to handle new super-sized container ships coming through the Panama Canal in 2014 before its harbor is dredged.

The wreck of the Confederate States Ship Georgia lies 40 feet below the surface of the river under a layer of silt. The ship was scuttled by Confederate sailors in 1864 to prevent it from falling into the hands of Union General William T. Sherman's troops as they approached Savannah.

After the ship is raised, dredging can begin for the $653 million project to deepen Savannah's harbor, river and shipping channel out to sea from 42 feet to 47 feet. The project, which has been studied for 15 years, is underfunded and does not yet have full approval from the Army Corps.

Savannah District Corps spokesman Billy E. Birdwell said it would cost about $14 million to remove the wreck of the ironclad warship.

Both the Union and Confederate navies had ironclads, 19th-century wooden warships covered in heavy iron plating, and they played a part in several dramatic sea battles in the Civil War.

The wreck is owned by the U.S. Navy and the boundary between South Carolina and Georgia runs right through the site, Birdwell said. Although the Corps has had an agreement since 1984 with both states not to dredge within 50 feet of the wreck, the ship has been damaged by previous dredging, Birdwell said.

"That's how it was discovered in the first place," he said. "We struck it with a dredge."