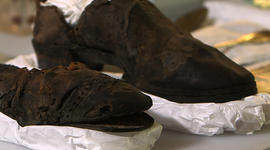 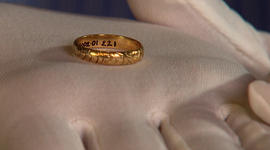 America is about to pay final respects to two of its fallen heroes more than a century after they lost their lives. But we can't tell you who they were and we may never know.

It is a solemn fact that the remains of Americans killed in conflicts dating back to World War II keep coming home from distant battlefields.

But Thursday was different, as flag draped caskets held unidentified sailors from the Civil War.

"Two human beings buried under there for 140 years or so," explained Joe Hoyt. He was one of the divers who discovered the remains in 240 feet of water off Cape Hatteras, North Carolina, where they had gone down with one of the Navy's most famous ships -- the USS Monitor.

"Arguably more significant than almost any shipwreck certainly in U.S. history," said Hoyt, "and to get down there and actually see it -- there's really nothing else like it."

The hull of the Monitor still lies where it sank, designated a marine sanctuary. But its gun turret -- with the remains still inside -- was raised from the bottom in 2002, and brought to the Mariner's Museum in Newport News, Virginia where Anna Holloway is head curator.

"This is the ship that you read about in 5th grade -- the Monitor and the Merrimack," she said.

The pride of the Union Navy earned its place in history on the day it fought the Confederate ship Merrimack to a draw.

"This was the first battle of iron-clad warships ever in history, and that's really what makes the Battle of Hampton Roads on March 9, 1862 so significant," said Holloway.

But ten months later the prototype for today's iron warships went down in a storm. "A very short life," said Holloway of the Monitor. "But a very monumental one if you think about her impact on modern warships."

When the turret was brought up, pieces of the sailor's lives came with it. A mismatched pair of shoes gave silent testimony to curator David Krop about the ship's final moments.

"If you think about the chaos the night of the sinking," he said, "if there's water coming into the ship, it's dark, you might just grab what's closest to you, put those on in order to get out of the vessel.