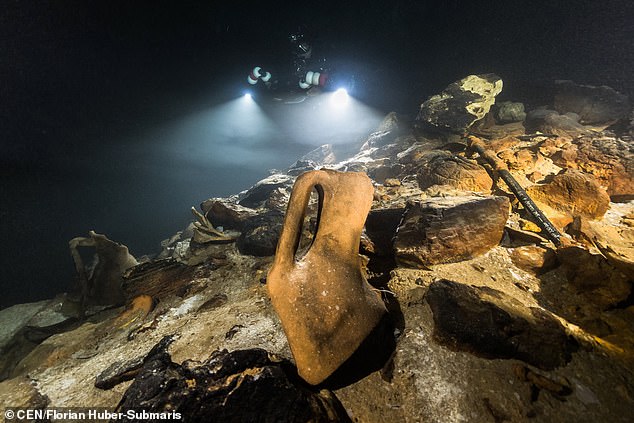 Around 200 Ancient Roman amphora have been discovered in an underwater cave off of the coast of Majorca — in the first dive down there in 20 years. Amphorae are ceramic pots — often used to store wine, other liquids, or grain — that have a two-handled design that dates back to the Neolithic Period.

The artefacts were found in the Fuente de Ses Aiguades cave, which lies in the Bay of Alcudia on the northeastern coast of Majorca, in the Spanish Balearic Islands.Experts from the so-called ‘Underwater Archaeological Research in the Caves of Mallorca’ Project are re-exploring the caves using the latest technology.

The team believe that the ceramic ware was left in the cave by sailors as some form of ritual offering.

The Fuente de Ses Aiguades cave was first discovered in 1998, with the last dive down there by underwater archaeologists having taken place in the year 2,000. Although the cave had been explored previously, experts are now able to give it a more thorough examination using modern technologies, with some 200 new amphorae found as result, project leader Manel Fumás told Central European News.

Modern 3D scanning technology, he said, will allow them ‘fully understand the cave’s layout.’ The cave — which is around 591 feet (180 metres) long and full of stalactites and many air chambers — is accessed by a narrow vertical shaft, once reached using a pulley system.

‘The mystery lies in why there are so many amphorae. It is not normal. One could fall, when the pulley broke, but not 200,’ Mr Fumás said.