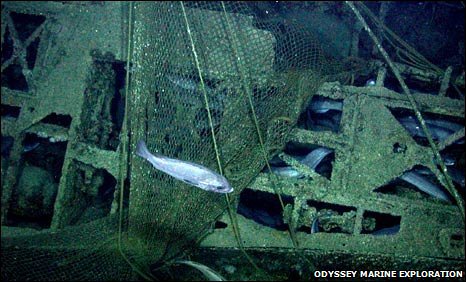 Many shipwrecks in the English Channel are in danger of being lost forever, partly due to damage done by fishing trawlers and dredges, experts say.

Wreck Watch has analysed a new sea bed survey and said historically important wrecks are being destroyed and should be raised.

Some 267 shipwrecks have been found, 115 of which showed permanent damage, said its leading marine archaeologist.

The wrecks include Royal Navy warship HMS Victory, lost in 1744. The ship went down with Admiral Sir John Balchin, 1,100 sailors and 110 bronze cannon.

It said the process would also benefit fishermen, identifying wrecks of non-archaeological value which could be safely fished.

The loss of expensive fishing equipment would also be minimised, said their report.

But trawler crews have disputed the claims they are to blame and questions have also been raised by some sceptics because the research was carried out by a US salvage company, which makes money selling sunken treasure.

Christopher Vinnicombe, of the Cornish Fish Producers' Organisation, said they tried to avoid the "thousands" of wrecks in the Channel because it often damaged their equipment.