Delving the secrets of HMS Victory 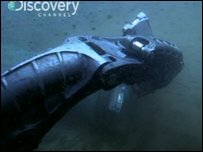 The squat yellow box, with its protruding arms and hoses, drips salt water onto the deck of the ship.

If you did not know any better, you might take the cuboid for a hardy piece of space junk - an old lunar module, perhaps - which had splashed down in the English Channel.

It is in the exploration business, as it happens, though its terrain is the bottom of the sea rather than the oceans of the moon. It is a Remotely-Operated Vehicle (ROV) known as Zeus, which is dunked in the briny in order to examine the seabed for shipwrecks.

The people behind Zeus claim that it has helped them to solve one of the great maritime mysteries of all time - and also to uncover a major threat to Britain's marine heritage.

Odyssey, a US-based exploration company, has found HMS Victory, the predecessor of Nelson's flagship, and the most formidable vessel on the high seas in its day.