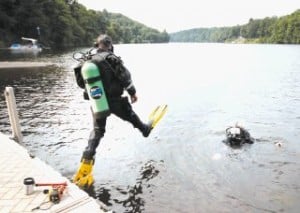 Yet the Granite State also has mysteries of the deep, or in this case, mysteries of 20 feet beneath the Connecticut River.

Local divers recently discovered pieces of a suspension bridge built in 1888 that connected Chesterfield and Brattleboro more than 100 years ago. The bridge was washed out during a flood in 1936, and has since lain untouched on the river bottom.

For decades, motorboats likely have sped over the remains of the New Hampshire side of the bridge; fishermen may have dropped their lines within yards of the spot where pieces of the bridge lie in the sediment below the surface.

But two months ago, the Brattleboro Fire Department’s Dive Rescue Team was training in the area when the dive boat’s sonar picked up a large mass underneath the water.

Robert D. Cornieller said they thought it was a sunken boat and planned to come back to the spot to check it out at another time.

When Cornieller and Matt B. Hubbard, both members of the dive team, did return, they weren’t sure exactly what they had found.