A vessel of Indian culture 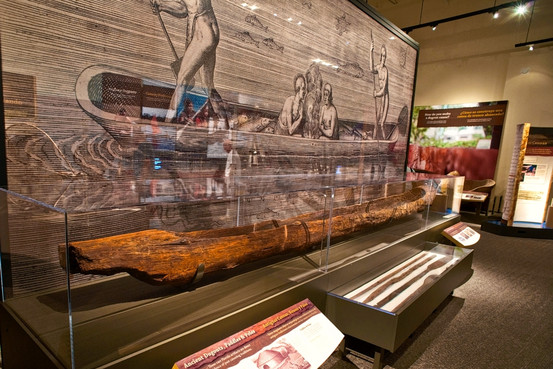 In the spring of 2000 Steve Everett and his environmental-science students from Eastside High School here were examining the isolated north shore of the 5,800-acre Newnans Lake, six miles east of town, looking for signs of a former logging camp.

But what at first seemed to be logs lying on the exposed bed of the drought-stricken lake turned out to be dugout canoes, their bows and sterns emerging from the mud.

Once state archaeologists were called in, 101 canoes or partial canoes were found and studied, their positions mapped and samples of their wood radiocarbon dated. Dugouts were found buried on top of one another, while more were discovered spread out farther down the shore.

Three-quarters of the canoes examined were constructed from Southern hard pine; other woods used were cypress and conifers. Lab tests showed the vessels dated from 500 to 5,000 years ago; their lengths ranged from 15 to 31 feet. It was the single largest cache of prehistoric watercraft ever discovered.

In a telephone interview, Mr. Everett said some of his students worked into the miserable, humid Florida summer, aiding the professional archaeologists as they learned what they could before the rising lake submerged the boats.

And there, now under about five feet of water, the canoes remain—too fragile to remove from their protective environment. Earlier exposures of the lakebed over millennia had weakened the wood's structure, meaning anything removed without subsequent years of expensive restoration would turn to dust.

Some of the archaeologists were from the University of Florida, and the school's Florida Museum of Natural History wanted to share the information acquired from the dig, showing not just how canoes were used in the past, but how they still play a vital role among present-day Indians.

"Dugout Canoes: Paddling Through the Americas" makes clear these wooden vessels were—and are—the pickup trucks of Native America. Their owners piled their families, food and items for trade into dugouts to carry them across a lake or far across the sea.