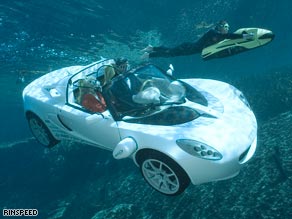 The heady days of James Bond are but a distant memory and, the sad fact is amphibious cars are just not that cool anymore.

But a new fully submersible car inspired by Bond and updated for the new millennium could breathe fresh life into the sub-aqua sports car.

The Rinspeed sQuba is a fully submersible car designed by Swiss car designer Frank M Rinderknecht. Inspired by James Bond's submersible Lotus Esprit in the 1977 movie "The Spy Who Loved Me," the car drives on land, on water -- and under the water to a depth of ten meters.

Released as a prototype last year, the car is carbon neutral, entirely emissions-free and boasts electric motors and water jets to allow the driver to control the vehicle under the water.

The sQuba also has a compressed air tank which allows the occupants to breathe under water and all of the body work is water-tight and water-resistant.

Rinderknecht, the chief executive of Rinspeed, told CNN that no further units of the car have been produced but commercial production was not out of the question.

"Since the sQuba was perceived as a prototype, the manufacturing has not been explored. However, we are open for anyone to take up the project to serial production," he said.