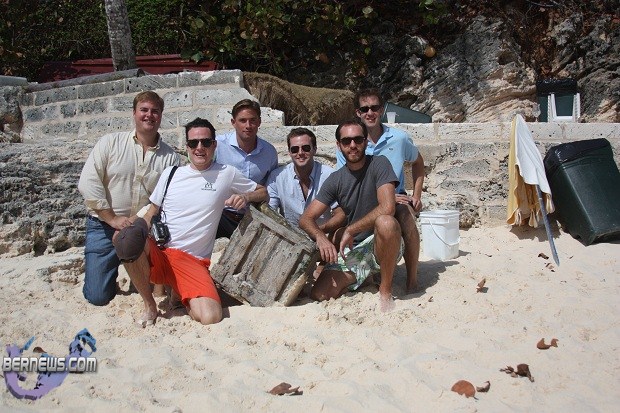 A group of visitors pulled a chest from the ocean, which after a delayed time that saw the Police Bomb Squad clear the area, was determined to be ammunition from a ship that wrecked off Bermuda in 1915.

The guests had flown into Bermuda to celebrate a wedding, with the majority coming in from New York and staying at the Coral Beach Club. The finders were Walker Brock, John Macaskill, Brendan Johnston, Andrew Gooss, Thatcher Martin, Will Rabbe and Chris Sturgess.

The group informed us that one of them was already well known around the hotel prior to the chest discovery, due to a drunken incident which resulted in him being found in the morning fast asleep on the hotel grass.

Yesterday they spotted the box lying in the ocean floor; approximately 11 feet deep and 50-100 feet from shore. Upon discussion they decided to attempt to pull it up, and waited till high tide today to make the job easier.

A number of them combined starting at approximately 11am today, and with the use of a volleyball net they managed to drag the box off the sand and place it on a boogey board.

They said the board was somewhat sinking under the weight, but they managed to safely get the box ashore. The entire procedure took around an hour, resulting in the box coming ashore at around 12pm today.