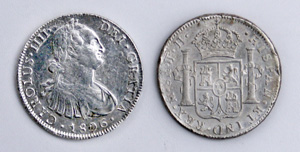 The Bermuda Triangle is famous for mysterious disappearances but this time the triangle has given back a trove of silver coins lost in the 18th century, which are now at Cannon Beach Treasure Company.

As if right out of a Hollywood blockbuster, deep-sea submersible Mir 1 (of Titanic fame) slowly pushes through the pitch-black water, three miles below the surface of the Atlantic Ocean.

The lights soon reveal what appears to be the rigging of a sailing ship scattered on the bottom.

Then another shape emerges from the dark depths revealing itself to be the bow of an 18th century sailing ship thought to be lost forever in the Bermuda Triangle in 1810.

As Mir 1 approaches the stern of the wreck, the remains of a wooden chest come into view and it is filled with silver coins.

"There were only 1,315 coins recovered from this shipwreck, which makes them extremely rare," says historian and treasure hunter, Robert Lewis Knecht who owns Cannon Beach Treasure Company with his wife, April.

"They were recovered in 16,000 feet of water from the world's deepest, known treasure shipwreck."