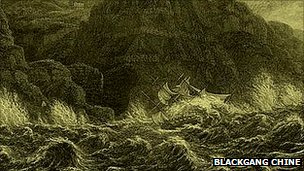 The poor communities in an isolated part of the Isle of Wight once relished the chance to plunder the wrecks of unfortunate ships that crashed upon the shore.

But their fortunes changed following the sinking of the Clarendon in 1836 which saw a lighthouse built at St Catherine's Point.

All but three of the Clarendon's 27 passengers and crew perished within 10 minutes of it being wrecked at the coastal ravine called Blackgang Chine.

The 175th anniversary of the disaster is on 11 October, but maritime historian Stuart Haven said the Clarendon was "not as widely known as it should be".

Mr Haven, from the Royal Marines Museum in Southsea, said: "The incidence of a shipwreck is a combination of things - it's either a time capsule for modern archaeologists to study or it can be thought of as a moment of human drama where the passengers have their own story to tell.

"This is one of those great stories that's been forgotten over the course of the years."

The Clarendon left the West Indies on 28 August 1836 with the captain, 16 crew and 10 passengers, including several children.

It was battered by gales in the Atlantic Ocean and by the time it entered the English Channel the storms had increased, forcing it towards Portsmouth.

Seeing the Clarendon's plight, an islander called John Wheeler and a group of local fishermen ran to Blackgang Chine to help.

Wheeler tied a rope around his waist and jumped into the sea as the ship hit rocks at the chine. Three crew members were subsequently rescued from the water.

Ken Phillips wrote in his 1988 book Shipwrecks of the Isle of Wight: "According to the survivors, those on board could see their would-be rescuers waiting, helpless to reach them against the fury of the storm.