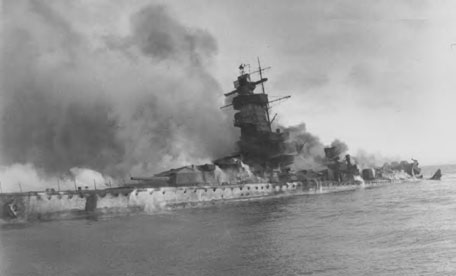 The Admiral Graf Spee, the German "pocket battleship" scuttled to Uruguay in 1939, is caught in the middle of a struggle between the businessman salvaging it and the German government, which wants to prevent its commercialization.

"We always proposed a serious historical and cultural destiny" for the remains of the Graf Spee while "contemplating fair compensation" for the work and investment made to recover its remains, Alfredo Etchegaray, the businessman, told AFP.

During a visit to Montevideo this week, German Foreign Minister Guido Westerwelle said his desire was "to prevent the remains of the symbols of the Nazi regime from becoming commercialized."

"What we want really is to reach a constructive deal," he said, adding that Germany was prepared to support the presentation of the remains "in a historical context, like a museum."

Two years earlier, they had come up with a 27-tonne rangefinder used to direct the ship's cannons. And in 1998, a 155 millimeter (six-inch) gun from the ship's secondary armament was salvaged.

The underwater salvage group planned to bring up more cannons and other pieces of the Graf Spee, but were barred from doing so by a Uruguayan government decree.

After the recovery of the Nazi eagle, with its outspread wings and swastika, Germany sent a note to the Uruguayan foreign ministry claiming ownership of the Graf Spee and opposing continuation of the salvage work.