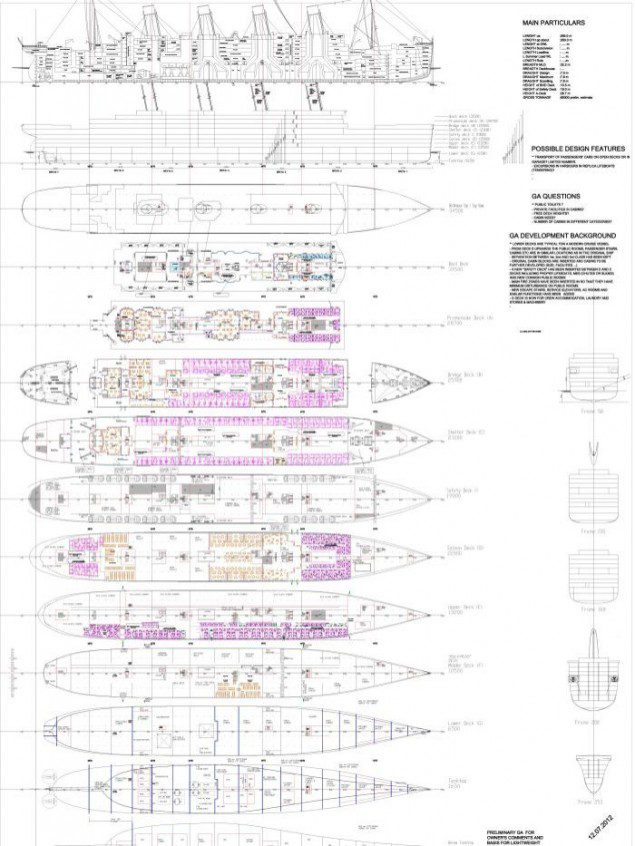 Australian billionaire and political-hopeful Clive Palmer on Tuesday offered the first glimpse into his Blue Star Line’s Titanic II replica project and the design is so authentic that it even comes with space for steerage passengers and a special space for the correct amount of safety equipment.

The design, developed by Finish-based Deltamarin, comes fully equipped with nine decks reminicent of the original, included with the famous black hull, four smokestacks and, of course, the Grand Staircase.

Also included, is an added ‘Safety Deck’ to house the required number of lifeboats and other safety equipement otherwise missing on the first addition.

Sticking with the authentic theme, Blue Star Lines said from deck D upwards Deltamarin’s design has managed to keep the public rooms, passenger stairs, cabins and other features in similar locations as in the original ship.

So authentic, in fact, that the ships accommodations will even be separated into first, second and even third class digs.

“The Preliminary General Arrangement plans depict the original separation between first, second and third class, which will be kept in the ship’s final design,” Palmer said.

He added, “To ensure Titanic II is compliant with all current safety and construction regulations, a new ‘Safety Deck’ has been inserted between D and C decks and will feature proper lifeboats, safety chutes or slides as well as new common public rooms.

New escape stairs, service elevators, air conditioning room and similar functions have also been added and the inclusions of main fire zones have been designed so that they have minimum disturbance on public rooms.