Windermere: Loss of a British ship with a precious African cargo

Sea chronicle: The foundering of the Windermere

The brig "Venus", from Newfoundland, came into the harbour of St. Helier, this morning, 13 January 1812, having on board nine men, the surviving part of the crew of the"Windermere", of Liverpool, which foundered in a heavy gale near the coast of Ireland, on the 8th instant.

The "Winderemer" was a fine ship  of 367 tons burden, with a crew of 23 men and boys. She was bound from Old Calabar to Liverpool, laden with a cargo of palm oil, ivory, red wood, and also 1,500 dollars in specie.

On the 8th of January, at 10 pm., being at 50° N. latitude and 14° W. longitude, in the midst of a violent gale, the vessel, shipped a heavy sea, which tore the ringbolts from the deck, carried away the boats and split the lee gunwale.

At eleven o'clock, a tremendous sea stuck her again, which hove her on her beam ends, carried away her foremast and bowsprit, and washed the master and height of the crew overboard.

She immediately filled, bit the remaining part of the crew having cut away the main and mizen masts, she righted. In a few minutes more, the decks were forced up by the pressure of the water underneath; and the crew, now reduced to fourteen, were obliged to take refuge on the poop.

In the course of the night, two more hands were washed overboard, and next day one boy died through excessive cold and fatigue.

In this horrid situation, straining every nerve to maintain their hold against the fury of the waves, which threatened every moment to ingulf them, the miserable remnant without any sustenance whatever, until the 10th instant, when at twelve o'clock, the brig "Venus", of Jersey, hove in sight, and with a praiseworthy humanity, made every effort to rescue the sufferers from their perilous situation.

But here another difficulty presented itself; for the "Venus" had lost her boats, and had otherwise been materially injured in the previous gale.

The only method, therefore, of escape was by swimming, and the assistance of ropes thrown towards the wreck; by which means nine men got on board the "Venus", two being drowned in the attempt and the "Windermere" soon foundered... 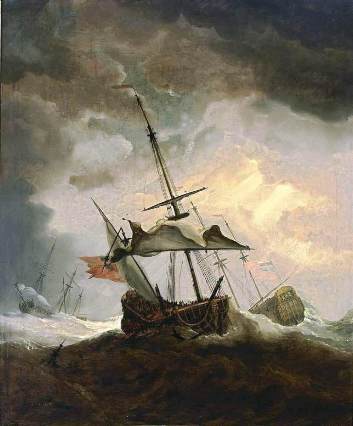