A First World War loss - The torpedoing of the SS Abosso

Elder Dempster & Company, Limited, was formed in 1852 as the African Steam Ship Company, Limited, with a contract to carry mails from London via Plymouth to Madeira, Teneriffe and the West Coast of Africa. In 1856, the home port became Liverpool. A rival firm, the British & African Steam Navigation Company was formed in 1868 with John Dempster and Alexander Elder among it's founders.

The "Abosso" was torpedoed and sunk by the German submarine U-43, captain Hellmuth Jürst, on April 24th, 1917, 180 milles North 78° West of Fastnet, on a voyage from Lagos, Bathurst, Gambia (West Africa) to Liverpool, UK, with passengers and a general cargo of West African produce including tin ore, concentrates and some gold.

65 persons lost their lives, but the captain was amongst the survivors.


Answers to a typical questionnaire after an act of war (Admiralty) during the WWI:

6. Submarine was not sighed

9. No manoeuvre as no submarine was not sighted

24. By explosion of one torpedo. Master went down with the ship and was afterwards picked up

The "Abosso" is one of the numerous ships lost in the depths of the Atlantic during the First World War... 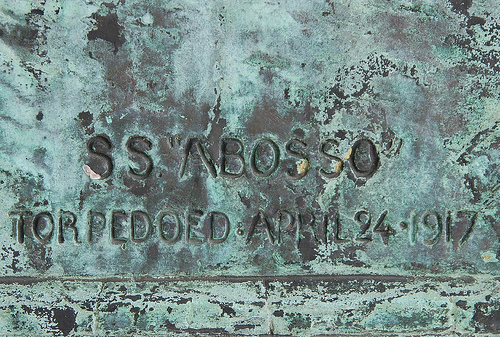