@ More about the recovery of the cargo

In early January 1822 a large ocean going junk, fat bellied, with squared off bows and stern rising high out of the water, was lying calmly at anchor in Amoy harbour.

At the prow end were depicted the two huge, ever watchful oculi that all sea going junks were adorned with - staring eyes constantly scanning the horizon for any signs of danger, part of a grotesque visage designed to frighten off sea demons.

The bows were painted green which signified that the junk belonged to the port of Amoy and they also carried the junk’s identifying registration in bold red characters.

The Tek Sing was carrying 1600 passengers aged between 6 and 70, a large crew and in her hold was a large cargo of valuables such as tea, raw silk, and a huge cargo of precious Chinese porcelain. 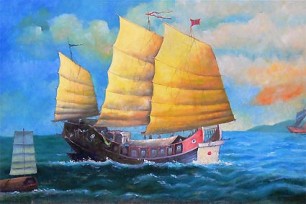