The loss of lives on the Royal Adelaïde

The loss of the Dublin steamer Royal Adelaïde

Another fatal catastrophe must be added to the long catalogue of losses recently occurred in our merchant navy. The "Royal Adelaïde" , a paddle steamship of between 400 and 500 tons, owned and operated by the City of Dublin Steam Packet Company, captain John Batty, left Cork for London, fully laden with a general cargo, a crew of 24 and some 300 people.

She stranded on the sands known as the Tongue, about 15 miles from Margate, on Saturday 30th  March 1850. The ship became immediately a complete wreck with the loss of all on board; not one even being left to relate the melancholy tale. The dead included more than 150 deck passengers from Ireland during a time when the Great Famine was at its height.

The "Royal Adelaïde" was coming from Cork, what would have been the very great loss of time and interest of money had she, instead of steaming up channel in the dark, spent half a dozen hours in Margate roads at anchor ? Certainly the lives of some 300 people and the saving of a ship and cargo, are well worth a few hours delay.

It appears that on Saturday evening, about half past eleven, a barque, which was running up channel, shortly after having passed the Tongue light ship, passed a large steamer from which signals of distress were fired in rapid succession. The steamer, from her position, was evidently on the sand, but as the wind blew a perfect gale, it was quite impossible  to render any assistance. They threw up rockets in reply to the signals. This was observed from the shore by the coast guard attached to the Westgate station, but as they were repeated only two or three times, the men did not give any alarm to the pilot boats.

On Sunday morning, however, the full extent of the catastrophe was known, and a large number of lugger boats from Margate and Deal proceeded to the Tongue. They remain on the spot for the chance of picking up any part of the cargo. Not a vestige of of any of the boats belonging to the "Royal Adelaïde" has been discovered...

It is said that she was carrying a certain amount of gold in her holds... Nobody, even nowadays, has found it yet ! 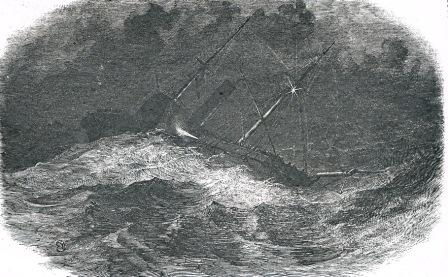 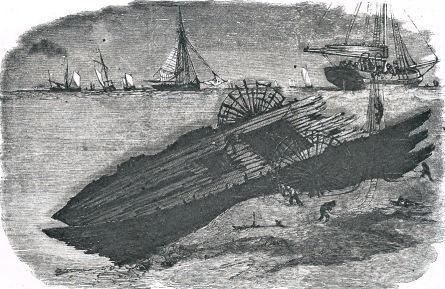 The wreck from "The Illustrated London News"