The disaster of the Flora Temple

The Flora Temple was a first class ship, and having been chartered for the conveyance of coolies, sailed from Macao on the morning of the 8th of last October.

Her crew, including officers, were about 50 men, and four days after leaving port they encountered a heavy gale of wind from the south-west, and Capt. Johnson declined making more sail, being apprehensive that a current might set the ship to the eastward, in the direction of reefs which were marked upon the chart.

The sights obtained at noon were good, and the position of the ship appeared to be so far (36 miles) to the westward of the most westerly reefs in the latitude in which they then were, that the captain, having directed a good look-out to be kept, apprehended no danger from standing on until 8 P.M., at which hour he had given instructions that the vessel should be put about.

At 7:20 P.M. he came on deck, from the tea-table, and in answer to inquiry, was informed by the officer of the watch that a good look-out had been kept from the topsail-yard.

It was then discovered that the ship was within a short distance of the breakers, which could now be distinctly seen and heard, and which extended in a curved line from about four points on the starboard bow to about three points on the port bow.

It seemed impossible a long ship like the Flora Temple could escape them, and although the yards were braced round, and the ship hove aback, she struck first slightly, and then very soon afterwards several times with a tremendous crash, the breakers running very high alongside.

Pieces of her timber and planking floated up on her port side, and after some more very heavy bumps she remained apparently immovable, with a heavy list to port, and the water rapidly increasing till it reached between the decks, where the coolies were. It was found impossible to extricate her.

While this was going on (indeed, almost immediately after the ship struck) a fear that the coolies would rise and murder all on board seemed to have possessed the minds of the crew, and to such a height did this rise that the captain (having at, the time, however, no intention of abandoning the ship) had the two quarter boats lowered, and placed an officer and five men in each, with orders to remain close to the ship so that refuge and assistance might be at hand.

The crew appeared to have been thoroughly unmanned; their only anxiety was to get out of the ship, and but for the captain and his brother, and a few others on board, the boats would have left the ship absolutely unprovided with the necessaries of life.

These boats were lowered at 4 o'clock. At 12 o'clock the other boats were got out, and there remained the long-boat, which the panic-stricken men had declared it was impossible to get out.

Only fifteen of the crew remained on board, and the labor and difficulty in getting the boat out was immense. At length it was got over the side at 4 A.M., and with its crew pasted safely through the breakers.

Before leaving the ship the lead was hove; four fathoms was got under the bows and stern, and three fathoms amidships. Immediately through the breakers there was no bottom at fourteen fathoms.

At break of day the ship appeared to be almost without motion. Her masts were standing, she had a strong list to port, her back was broken, and the sea making a clear breach over her starboard quarter. The coolies, who had remained below all night, were now up and clustered on the upper decks.

The captain, after passing round the northern extremity of the live of breakers, joined the starboard quarter boat, which had the smaller boats in company, the port quarter boat, with the second mate in charge, having deserted during the night, alarmed, probably, at the guns which were fired from the ship, and which to them seemed to denote the dreaded outbreak of the coolies.

The crews of the dinghies were then transferred to the long boat and quarter boat, and at 9 A.M. sail was made to the westward. The wind then rose to a severe gale from W.S.W., with a tremendous sea and heavy rain, and the boats parted company.

From Saturday, the 15th, till the following Friday, the gale continued without abatement, and serious apprehension was felt for the safety of the starboard quarter-boat, which contained Mr. Marshall, the mate, nine men, and two boys, and the port quarter-boat, which had in her the second mate, Mr. Walton, and five men.

The long-boat contained thirty-one,; including Capt. Johnson, his brother, and Mr. A.P. Childs, the surgeon. Throughout the seven days while the gale lasted, this boat was hove to under a close-reefed mainsail with a bucket veered out to 20 fathoms.

Most of them had saved nothing but what they stood in. The boat was an open one, and they were drenched with the seas that broke over them, and with the rain which fell night and day. They were covered with salt water boils and suffered much pain. A biscuit and half a pint of water a day was all they dared to venture on, and sleep was almost impossible.

On the Saturday the wind and sea abated. Fortunately, the captain had saved his sextant and his chart, and as they found the boat drifted by the gale as far as 13° N., it was determined to make for Touren, the French settlement in Cochin China.

On the Wednesday, twelve days after leaving the wreck, land was made to the south of Touron. The boat was made fast to a fishing stake all night on account of the strong current which had swept her to the south the day before, and on the following evening they came in sight of the French squadron.

Finding it impossible to weather the Cape that night, they put into a small fishing harbor, where they were roost hospitably treated, and on the next evening, the 28th, they reached Touron.

They were received on board his Imperial Majesty's steamer Gironde, and Capt, Johnson at once put himself in communication with the French Admiral, M. Page, and begged him to send in search of the missing boats, as well as to rescue the coolies.

With the greatest readiness the request was complied with, and the Gironde was dispatched to the scene of the disaster, Capt Johnson, his brother and Mr. Childs, the surgeon, accompanying her.

They came in sight of the reef on the afternoon of Nov. 2. The sea still rolled and broke as before; but no remnant could be seen of the ship, till, on proceeding closer in a boat, her port side, from the main chain forward, could be observed floating.

Of the 850 coolies, no traces remained.

Close to the reef, within a short distance of the wreck on the southeast side, the boat sounded, and found no bottom at 27 fathoms, and within a mile to northwest there was no bottom at 70 fathoms. The breakers extended about half a mile in a curved line. They were very narrow -- not over 150 yards in width. The position, according to the calculation on board the Gironde, was 10° 19' N., 113° 13' E., while Capt. Johnson made it in 10° 16' N., and 113° 20' E. Nothing remained to be done.

The unhappy coolies had doubtless perished, and the Gironde at once shaped a course for Manila, where she arrived on the evening of Nov. 8.

It is stated that it was impossible to make any attempt to save the coolies. Captain Johnson and his brother are said to be very humane and courageous men, but the crew were so terrified that it was almost by exertions beyond belief on the part of the Captain, his brother, and a few others, that the safety of the crew even was secured, It appears, however, that they had some reason for distrusting the coolies at this crisis.

On the Monday after they left Macao all seemed comfortable and cheerful; their food was plentiful and good, and their state was well cared for, the necessary order and discipline among them being enforced by their own head men exclusively. An outbreak was the last thing anticipated.

On the Tuesday morning, at 7 o'clock however, three days after leaving Macao, the watch on deck being scattered about the ship, and the guard at the port gate of the barricade which was erected between the coolies and crew (who slept aft) being away from his post, the coolies, who had collected on deck in large numbers, suddenly fell upon the guard at the starboard gate, struck him on the head with an iron belaying-pin as he was stooping down, drew out his sword, and having cut him frightfully, afterwards, with cruel ferocity, dispatched him with a hatchet.

They then made a rush through the barricade towards the cabin. While this was going on aft, others of the coolies were calling "Fire, fire," to induce the watch, who were in the fore part of the ship, to go down below.

Fortunately the captain had come on the poop just in time to see the rush aft. He ran to his cabin, seized his revolver, and called the surgeon up. The captain's brother armed himself also, and half a dozen shots put them to the rout -- not before one of the crew was hacked to pieces and killed, and others wounded.

The coolies were armed with the cook's axes, the chain-hooks, iron belaying-pins, handspikes, and every weapon they could lay their hands upon, and but for the sudden panic which the unexpected shots from the revolvers produced, it was impossible to say what would have saved the crew.

On inquiry it turned out that a deep-laid scheme had been planned for killing them all and taking possession of the ship, and it was this design, and the crew being constantly on the guard, that produced such apprehension and terror among them when the ship struck. It is reported that the boats were no more than sufficient to save the crew, forty-nine in number.

The ship was 300 miles from land, and it is stated that it was impossible to raft 850 men so great a distance, much less feed them, even had the crew been justified or encouraged in trusting their lives to the coolies? forbearance.

It was felt that the only chance of saving even one of the unfortunate coolies was their falling in with a ship which, perhaps, might be induced to go to their assistance.

Although the long-boat crossed the most frequented part of the China Sea, not a sail of any kind was seen. 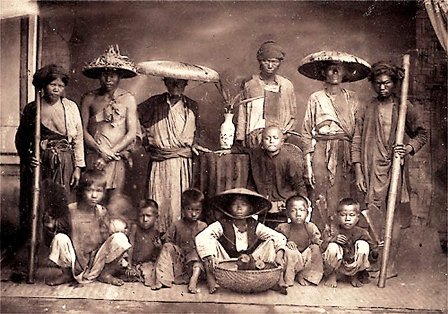