The Cinque Chagas: One of the largest submerged treasure still to be found

The account of the Chagas battle with the British represents probably the most horrible spectacle ever known to the Portuguese. We are in 1594...

From printed account of the few survivors: <<The sea was purple with blood dripping from the scuppers, the decks cluttered with the dead and the fire raging in some parts of the ships and the air so filled with smoke that not only we could sometimes not see each other but we could not recognize each other, all black and sooty from the fire and gunpowder...>>

An original dispatch of Francesco Vendramin, Venetian ambassador to Spain, found in the Italian archives, describes the loss of the "Chagas":

<<...The trouble caused by the English is felt more acutely every day at Lisbon. A ship, the richest that ever sailed from the East Indies was lost the other day... It was the largest of the four or five that were expected from the East India ports, and also the best armed, was laden with a cargo worth upwards of 2 millions in gold, not only in pepper and drugs, but in a large quantity of oriental pearls, jewels and other precious goods...

The captain tempted by greed, took on board four hundred blacks whom he intended to sell in Spain. The heat and overcrowding brought on the plague, of which upwards of 500 persons died in 10 days. Besides the blacks there were on board 300 passengers, chiefly Italian and Portuguese merchants.

After this terrible mortality, the ship began to draw near the Azores, were she was exposed to the fire of three English corsairs, who followed her up for two whole days with a heavy cannonade. The English drew close and managed to board her with 25 men, but these were all cut to bits.

Seeing there was no hope of capturing her, as she was now in sight of the Azores, the English resolved to fire with Greek fire which was applied to many parts of the ship at once and then uniting made a tremendous flame, in the midst of which she went down with crew and cargo, and not a thing fell into the hands of the English.

It all began with a group of English Privateers sailing for Teircera in the Azores. The 250 tons Royal Exchange, flagship commanded by Georges Cave, the Mayflower, captain William Anthony, the Sampson, captain Nicholas Downton, a caravel and a small pinnace were cruising in the vicinity of the Azores when they spotted a "tremendous" Portuguese carrack of 2.000 tons.

"Las Cinque Chagas" was reported, by the 13 survivors  out of 1.000 passengers and crew, to have been one of the richest-laden ship yet to leave the East Indies. Aboard the ship, common Portuguese seamen carried pocketfull of jewels. She had left Goa in late 1593 and Mozambique with all her reaches for the Old Continent...

Her wreck is now lying, untouched, in the depth off the Azores waiting for the group who will be clever and lucky enough to locate her remains.

Probably one of the richest wreck ever still to be found in the world. 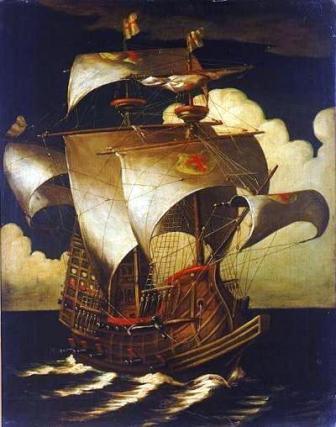 From the National Maritime Museum, Greenwich