The shipwreck of Saint Paul

From various newspapers and printed source - by Pascal Kainic 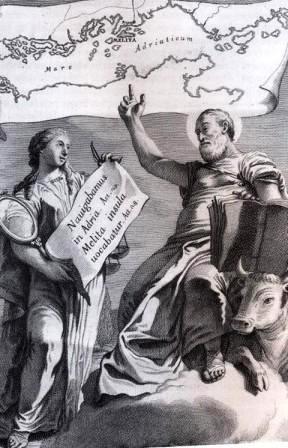 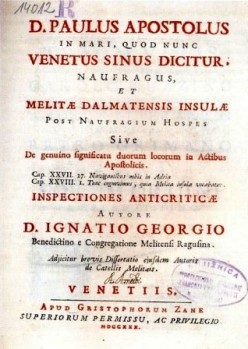 "And the rest, some on boards, and some on broken pieces of the ship; and so it came to pass that they escaped all safe to land" ...
- Acts xxvii.44, xxviii.5 -

In 1730, Ignation Giorgi, a Benedictin of the congregation of Meleda, published at Venice a latin dissertation entituled:

The writer undertakes to show that the shipwreck  of Saint Paul, recorded in the Acts of Apostles, happened on the Island of Meleda, near the coast of Dalmatia, in the Adriatic Gulf and not that Melita, at present named Malta...

Towards a right understanding of this question, the first step seems to be a careful perusal of the sacred text, chapter XXVII and XXVIII.

1) The Island of Meleda, not far from Ragusa, was also called Melita in the time of Luke the Evangelist; and what it meant by Adria, never was by any ancien writer supposed to extend near so far as the present Island of Malta.

2) The tempestuous wind Euro-clydon must not have been the N.E. (Euro-aquilo), but the S.E. and consequently have driven Paul's ship into the Adriatic in like manner as Acrotatus, a Lacedaemonian, going to from peleponesus to Sicily, and the Jewish historian Josephus, sailing like the apostle from Judea to Rome, were both driven into that gulf.

3) The name of barbarians, twice given to the natives by Luke, is more applicable to the inhabitants of Illyria, than to the Greeks of Malta; a circumstance which has embarrassed Lightfoot, Bochart, Cellarius and other commentators.

4) There is no such quicksand as that on which Paul was wrecked at Malta whereas there exists such towards the south point of Meleda. At the former, indeed, near what is called "la casa di S.Paolo", there is a rock, but the history shew that the ship did not encounter a danger of that sort.

5) The apostle is said to have been bitten by a venemous serpent, whereas there are no noxious reptiles in the island, and even the earth of it is pretended to be a specific antidote against such poison.

And as to Saint Paul having wrought a miracle to deliver that island for ever  from the reptile tribe, surely an act of that importance would have been recorded by the sacred historian, as well as the cure of Publius and others, or as the name and figure of the Macedonian ship... 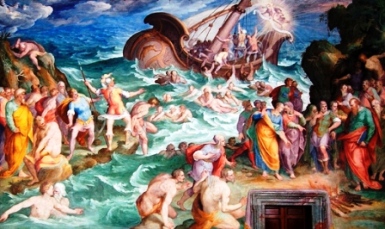 The shipwreck of Saint Paul, by Nicolo Circignani