Fire at sea on a British transport ship

Terrible loss by fire of the Abeona transport ship

In November 1820,  the transport-ship Abeona was chartered by the Government for the conveyance of emigrants from the Clyde to the British settlements at the Cape of Good Hope.

Having taken on board fourteen passengers at London she proceeded to the Clyde, where the emigrants embarked, to the number of one hundred and twenty-six.

The captain, officers, and crew numbered twenty-one persons, and with a fair wind the ship entered the Atlantic from the mouth of the river. Nothing of importance occurred on the passage until the outbreak of the conflagration, which destroyed the vessel and deprived one hundred and twelve of the passengers and crew of their lives, together with all the possessions of many of the emigrants.

The following narrative of the burning of the transport was given by Mr. Fisher, the surgeon on board:

"It is with the most painful feelings that I undertake the melancholy duty of giving an account of the destruction, by fire, of the Abeona transport when on her way with emigrants to the Cape. About a quarter-past twelve on the afternoon of the 25th of November, Mr. Duff, first mate, was serving out the rum in the store-room, when, as it is supposed, the flame of the candle accidentally communicated with the spirits, or other combustible stores.

The catastrophe that ensued was alike sudden and awful in the extreme. So soon as the existence of the fire had been made known to the passengers and crew by the volumes of smoke which issued from below, as well as by the alarm that was at once raised by the mate, every exertion was made by the seamen and emigrants in handing the water along, and I joined the men and encouraged them when so employed, until the flames came up in such quantity and fury from the hatchways that all chances of saving the vessel were seen to be hopeless.

Our only alternative now was to get the boats out, and to this our attention was directed. Happily for us, we speedily lowered the two gigs which were on the quarters together with the skiff, which was stowed on the booms in the long-boat, which latter craft was now the only one remaining on board that could be used by the crew and passengers as a means of leaving the doomed vessel.

With the intention of launching the long-boat, it was started from the boom to the gangway, and we had her almost clear of the bulwarks. The tackle-falls were taken to the windlass, and the men continued heaving round, assisted by the captain and myself, until we found our position so dangerous that we abandoned the lowering of the boat and sought our safety in the gigs and skiff that were afloat.

The captain's boat happened to be under the larboard-bow at the time, and he entered it. I immediately followed him, and we were only a minute or two in the boat when the main and mizzen masts fell overboard on our side of the ship. The fore-mast was now in a blaze and from this time until the hull of the Abeona sunk beneath the waves the horror of the scene momentarily increased.

In a frenzy of fear some of the emigrants leaped overboard and were drowned, as it was impossible to save them. In their efforts to escape from the fury of the flames, others got out upon the bowsprit, and were either knocked off into the sea or killed by the fall of the fore-mast, which went directly forward.

We rescued from the ship, as well as from the water, as many as we prudently thought the boats could carry, considering the immense distance that intervened between us and the nearest land, and the innumerable difficulties with which we had to contend.

Even those in the boats who beheld their dearest relatives perishing before their eyes, felt constrained to acknowledge that the attempt to save more than we did would only have involved the whole of the occupants of the boats in one common and calamitous fate. This fact and the number of women and children, who were saved, are convincing proofs of our impartial behavior on the melancholy occasion.

The spectacle now presented was one of the most awful and distressing ever be-held by mortal eye. Without being able to render them any succor, we saw some of our fellow creatures throwing themselves from the bulwarks of the burning ship into the deep, while others were hanging by ropes and eagerly clinging to life, which we all so dearly value, although inevitable destruction stared them in the face whichever way they turned.

Unable longer to withstand this saddening manifestation of human misery, we rowed to a distance from the ship, picking up on the way some hammocks, spars, and a cask that were floating by.

Before leaving the deck I had a pig given to me by the cook, and I threw the animal overboard; it was taken out of the water by the men in one of the boats, who had previously taken the precaution to secure other two pigs as a provision against starvation on the inhospitable ocean.

Having got a mile or two from the unfortunate Abeona the crowded boats lay-to and we consulted as to the course we would follow under the painful circumstances of our situation.

Altogether, we found that our stock of provisions on board the boats amounted to about ten pounds of biscuit, a few bacon hams, and the three pigs which had been secured. Some water we collected by wringing our drenched clothes. That was our slender store of food to sustain the lives of fifty persons, until we either reached land or were rescued by a passing vessel. It was proposed that we should make for the coast of South America.

We resolved to remain within sight of the dreadful conflagration, in the hope that it might be seen from some passing ship in the night, and prove the means of our succor from a death by drowning or starvation.

When the fire broke out the weather was moderately calm, and it continued so during the night, with occasional puffs of wind and heavy squalls of rain. The flames abated but little of their energy until between three and four in the morning, when they suddenly ceased to illuminate the water, and the dark cloud of smoke which had hung for fifteen hours over the wreck was slowly driven by a light breeze from the spot where the burning remnants of the hull had sunk into the ocean.

At daylight on the 26th we descried a vessel about two miles distant; with all sail set before the wind, and coming towards us. Our sensations at the time may be more easily imagined than described. As the stranger approached we hailed her and rowed alongside, when we asked to be taken on board. We had then been in the boats during seventeen long and painful hours.

Our request was granted with the utmost alacrity. The ship that saved us was a Portuguese merchantman, called the Condessa da Ponte, Captain Joaquim Almeida, bound to Lisbon from Bahia, and with the solitary exception of a vessel which had passed us about five days before the burning of the Abeona, was the first passing sail we had seen for twenty days previous to our rescue. The flames of our ship had not been observed from the Condessa da Ponte during the night; consequently I could not but regard the arrival of a humane commander upon the scene of the calamity as a merciful interposition of Providence on our behalf.

The captain cruised about the spot where we thought the Abeona had been from six in the morning until noon, in the hope that some of the poor sufferers might be seen floating about on spars, and saved from a watery grave. In that expectation, however, we were disappointed, for not even a vestige of anything belonging to the burned ship or her unfortunate passengers was discovered.

On the 21st of December we arrived at Lisbon, where we received the kindest treatment at the hands of Mr. Jeffrey, the British Consul-General, and the gentlemen connected with the British Factory in that city. The most considerate friendship was also shown to us by the Reverend J. H. Siely and his amiable wife.

Of the crew of the Abeona, consisting of twenty-one men and boys, there were seven lost and fourteen saved.

Among those who perished, Mr. Duff, the chief mate, was deeply deplored by all who had witnessed his noble self-sacrifice at the final moment. With a generous regard for the passengers who were face to face with death, Duff resolutely refused to save his own life by going on board the small boat: declaring that he would abide the fate of those who were forced to remain with the burning ship.

Of one hundred and twenty-six emigrants, who were for the most part from Glasgow and the immediate neighborhood, only twenty-six were saved. Of the passengers, fourteen in number, who had gone with the ship from London, five were lost. 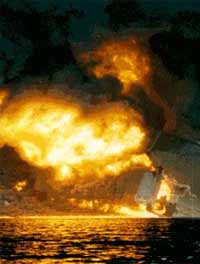 A ship at sea, on fire