Destruction of the mail steamer Connaught by fire

The Connaught left Galway, on her second outward bound voyage, for St John's and Boston, on the 25th of September, 1860, with a crew of 124 officers and men and no fewer than 467 passengers.

She was the largest steamship afloat at the time, except the Great Western, launched for the Galway company, 370 feet in length and 3000 tons gross burden.

On her passage to St John's she encountered rough weather, which did some trifling damage to her skylights and deck fittings, but nothing tending to produce the subsequent disaster.

On leaving St John's, her supply of coal was reduced to about 536 tons; and this large abstraction of freight rendered her very crank; the remaining quantity, moreover, was for the most part stowed in bunkers above the water-line, by which the ship's stability was still further impaired.

She could not have been more than 300 miles from Boston, the wind blowing a strong gale, and the ship very unsteady, when the passengers observed that she began to roll with a singular motion to starboard, and after heeled over did not rise again with buoyancy.

The officers and crew seemed anxious and busy; the engine stopped for some time, and water was seen through the gratings, washing about in the hold.

In fact, it had been reported that water was gaining ground in the ship's bilge.

As this increase was not observable in other parts of the ship, the interference was obvious that the cause was local, and that by applying the action of the pumps to this part and closing up the access to other parts the danger might have been obviated.

Instead of this, the pumps were applied  to reduce the water in the ship generally; at first with apparent effect, but the leak soon got ahead again, and by 9 A.M. of Sunday it has risen to the furnaces on the port side, and owing to the extraordinary list  of the ship, put out some of the fires in the fore stoke-hole.

From this time, owing to the difficulty of feeding, the steam went rapidly  down, though every effort was made to keep it up  by strongly urging the fires in the after stoke-hole.

At 10 o'clock it was found that the ship was on fire !

Narrative from a passenger :

"The fire appeared between the decks. Gangs were immediately formed, with pumps and buckets, to extinguish the flames, taking the water from the sea and passing it in buckets...

The flames were momentarily expected to burst out and sweep the decks, the fire gangs having given up all hopes of extinguishing them, but continuing to apply wet blankets etc... The side of the ship was then so hot that when she rolled it would hiss and make steam of the sea water.

A gallant little Yankee brig, the Minnie Schiffer sailed alongside and hove to, seeing our deplorable situation, and showing every sign of anxiety for us; but we began to think it would be impossible to stow all our numbers on board, she looked so small.

We have since ascertained that she was only 198 tons burden. Captain Leitch made all haste to get us into the boats. Captain Wilson, the commander of the brig, however, resolved to stand by her until every person was saved, and commencing with the women and children.

But, with all the exertions that could be made, when the sun went down only about 200 had been got aboard the brig. The gallant American persevered until he had got the whole, crew and passengers, in safety.

Scarecely a parcel of baggage was saved, the trunks and even the money of the cabin passengers being left below during the confusion and the alarm which called them on deck in the morning, after  which communication was cut off by the water and the flames.

The Connaught had 10.000 pound sterling in gold on board, government money taken at St John's which was lost with the ship. Only two small mail bags were saved."

She foundered approximately 150 miles off Boston. 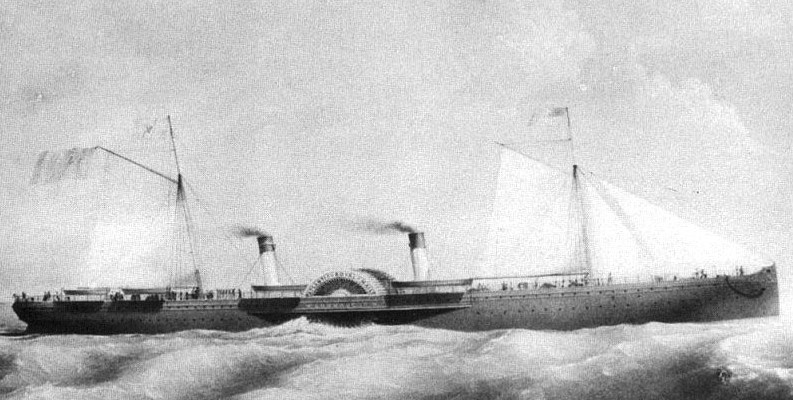