A rich Indian trader in the deep ocean

Foundering of the Regular
from various printed source - Pascal Kainic

The India trader "Regular", of 550 tons, under the command of captain Carter sailed from the Thames, London, on the 22nd of February, 1843, with a valuable cargo for Bombay. She had a favourable voyage until the 8th of July.

Then, by the heavy bearing of the ship, owing to severe stormy weather, it was found she had sprung a leak, and that there were several feet of water in her hold.

Notwithstanding five days and five nights of incessant labour at the pumps by the crew and the passengers, the water reached the cross beams of the decks, when captain Carter, finding that it was impossible to keep his ship afloat, decided to take the boats, which had been previously launched in case of emergency, and abandoned the vessel at eight o'clock in the evening.

At this time, they were in the open sea, approximately 900 miles from land. They rowed all night to the eastward; at daylight they hoisted one of the passenger's shawls at the end of an oar, as a signal of distress, which was providentially seen, and about noon they were rescued  by the French frigate "Cleopatra" of 52 guns, commodore Roy, on his way to Bourbon.

At that instant, she sunk fast and far down into the depths of the ocean. With the exception of the launch and one of the chronometer, every single article belonging to the "Regular" was lost; but the lives of all human beings on board were saved, and for that we had indeed cause for unbounded gratitude.

Many of the passengers were in a most pitiable state; however, the kindness and attention which they received on board the "Cleopatra" soon restored them. Nothing could exceed the kindness with which we were treated by the generous Frenchmen. The captain gave up his cabin to the ladies and the lieutenants yielded theirs to captain Carter and his officers and passengers.

The commodore generously insisted, instead of going to Bourbon, on carrying us all to the Mauritius, where we should be among our own countrymen, and from thence be able to reach, without difficulty, our different destinations.

We arrived at Port Louis on the 27th of May, not meeting during the passage with a single sail which might have recued our boats had we continued in them.

The "Regular" was a fine vessel built at Liverpool in 1814; the ship was partially insured and we have been informed on good authority that the "Regular" carried treasure in 22 cases of gold and silver, as well as £ 10,000 worth of copper and £ 1,000 worth of steel. 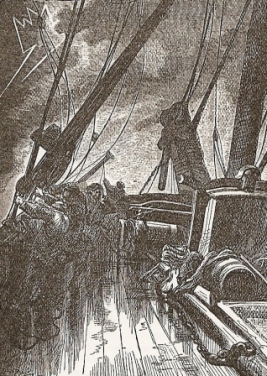