The Wreck of
the "San Pedro de Alcantara"

Many attempts have been mad to recover treasures that have been lost by wrecks, and one of these at least has been successful. The inventor of the diving- bell secured sufficient wealth from the great sunken ship in the Caribbean Sea that he was able to found a noble family.

There are many dollars yet to be saved and the Daily News in commenting on this subject says: “increasing skill in submarine work has, during the last few years, set the minds of the adventurous in the direction of sunken treasure ships.

Were the current less rapid between the mainland and Long Island attempts would long ago have been made to recover part at least of the £ 80.000 of coins destined for the payment of the English army, which went down to the bottom of the Sound in the Hussar during the American war of independence.

Not long ago, there was talk of a serious effort to raise or at least to empty the plate ships sunk at Vigo harbour, in Spain. While these expeditions have been talked about, another with a different destination has, according to an American newspaper, been fitted out at New York. Its object is the recovery of a portion of millions of dollars which went down on board the San Pedro de Alcantara, sixty-four guns, in the Spanish Main.

Some official documents state that she carried $ 3.000.000 in specie from which $ 1.000.000 in gold. Captain T.H. Folingsby, the commander of the expedition, has obtained liberal terms from the Government of Venezuela, who has given him an exclusive right to work for the recovery of the lost treasure of the San Pedro de Alcantara for six years in consideration of a royalty of five per cent on the proportion recovered.

A schooner of 100 tons, the Peter Mitchell, has been purchased and fitted for the work of dredging. She is said to be a marvellously swift and seaworthy vessel, originally built by the Canadian Government for the purpose of chasing intrusive Yankee fishing smacks away from the Dominion waters. Deprived of her guns, she was next put into the West Indian fruit trade, out of which she was bought for her present use. She has abundant cabin accommodation for her officers and the Venezuelan Government who will come on board at La Guayra, said to be the hottest place in the world, and not unknown to readers of English naval history.

The crew of the little vessel consists of twelve men in addition to their officers. She is fitted with powerful and in some respects novel dredging machinery. There is an upright steam engine of 20-horse power, with the necessary drums for working the dredges and drags. A derrick boom has been arranged to be rigged aft in such a position as to give a sweep of thirty-five feet outward from the sides and stern of the vessel for the dredges, so that, as the schooner is gradually hauled ahead, a space about ninety-five feet in width will be thoroughly explored.

Great difficulty has been experienced in procuring suitable dredges, those employed for ordinary purposes being entirely useless for working such a depth as that at which the San Pedro de Alcantara lies, some twelve or fourteen fathoms. Special dredges have, therefore, been constructed and are said to work admirably. When the operations are commenced the Peter Mitchell will be steadied in her place by four anchors. Her course and the ground she has gone over will be carefully marked out by buoys.

The most extraordinary part of the Peter Mitchell’s outfit yet remains to be mentioned. Captain Folingsby, himself an experienced diver, takes out with him, as a matter of routine, a complete diving dress and apparatus, but he relies upon other means for exploring the bottom of the sea. He has borrowed an idea from Will Watch.

It was an ancient practice of smugglers, when pursued by revenue cutters, to sink to the bottom of the sea their brandy kegs and water-tight cases containing other contraband goods.

When their accomplices deemed it safe to attempt the recovery of the sunken articles, they would rig a barrel with both heads out, and one end submerged as far as practicable, so that by looking through it, they could inspect the bottom and know exactly where to throw their grappling hooks. Captain Folingsby has improved on the primitive barrel, till he has produced a submarine telescope.

This curious instrument is nine inches in diameter, at the largest end, and twenty-four feet long. Its tubes are of thick tin and its object-glass is of French plate, very thick. With this instrument, properly slung, and weighted so as to keep it down in the water, Captain Folingsby thinks he will be able to see the smallest pebbles or coin on the bottom of the sea, at depth of sixty of seventy feet, as plainly as if they were on the deck of the Peter Mitchell.

All this carefully prepared apparatus would be of slight avail in stormy seas and swift currents, but it seems that the submarine telescope has been constructed with special references to the conditions of exploration.

The wreck of the San Pedro de Alcantara lies in an entirely land-locked position, in approximately sixty feet of water, where storms and rough winds never interfere with work.

Through the midst of the day there is a breeze which will doubtless prove grateful to the crew of the Peter Mitchell, but in the delightful early morning and the hours immediately before the tropic sun, there is scarcely a ripple on the crystal-clear water which covers a bed of shining white sand.

The San Pedro de Alcantara is evidently a wreck made on purpose for the skilful dredger, and Captain Folingsby appears to have done all to deserve success. He has selected a general wreck and not a phantom, has ascertained its position with tolerable accuracy and has spent a great deal of ingenuity and money on his apparatus.

We cannot, however, entirely ignore the experience of many similar expeditions, nor the remark of the Roman orator that to every other quality man must unite that of good fortune if he would succeed in the art military.

This will apply to every condition of life, but with especial force to expeditions like that to raise up the long-lost dollars of the San Pedro de Alcantara. 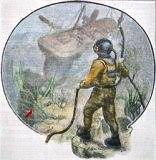